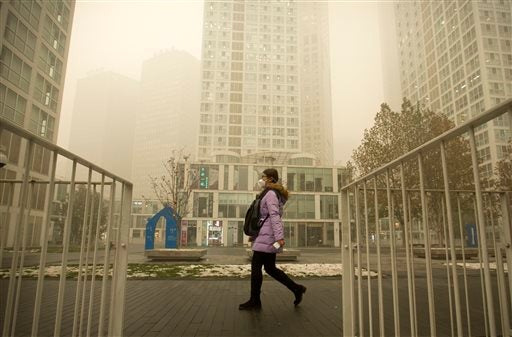 A woman wearing a face mask walks through a shopping and office complex amid heavy pollution and fog in Beijing, Tuesday, Dec. 1, 2015. Schools in Beijing were ordered to keep students indoors Tuesday after record-breaking air pollution in the Chinese capital soared to up to 35 times that of safe levels. (AP Photo/Mark Schiefelbein)

BEIJING — Schools in the Chinese capital kept students indoors and parents brought their kids to hospitals with breathing ailments Tuesday as Beijing grappled with extremely severe air pollution for the fifth straight day.

The heavy smog erased the capital’s skylines with a monotonous gray and left buildings just a block or two away barely discernible. Neon signs barely punctured the gloom, and many Beijingers wore masks of various kinds to work and while walking the streets.

Readings of the tiny poisonous PM2.5 particles reached into the high 600s micrograms per cubic meter through the capital, as compared with the World Health Organization safe level of 25. Some suburban neighborhoods logged levels up in the 900s on Monday.

Outside a children’s hospital in downtown Beijing, parents and grandparents complained about the smog’s impact on small children and say the pollution has made their children vulnerable to illnesses such as throat infections and the flu.

“The government is supposed to be tackling the pollution, so we need to see the effects. If in a few years the situation does not change, we will consider leaving,” said Yin Lina, who brought her 5-year-old daughter to the hospital with a stuffed nose.

The pollution spike is a reminder of China’s severe environmental challenges as President Xi Jinping joins other world leaders at the Paris climate conference.

Factories and construction sites were told to reduce work after the city government on Sunday issued its first orange alert — the second highest of four warning levels — in almost two years.

China’s cities are among the world’s dirtiest after three decades of explosive economic growth that led to construction of hundreds of coal-fired power plants and the spread of automobile ownership.

Communist leaders have tightened emissions standards and are investing in solar, wind and other renewable energy. But the country still depends on coal for more than 60 percent of its power.

Tests found coal burning to be to blame for the bulk of the latest pollution surge, the official Xinhua News Agency said, citing Zhang Dawei, head of the city’s environmental monitoring center.

Power demand soared due to unusually cold weather in November. For most of that month, the capital was shrouded in persistent smog.

Air quality worsened on Friday and deteriorated throughout the weekend. Authorities said they avoided issuing the highest-level alert because conditions were forecast to improve by Wednesday.

Beijing schools were ordered to stop outdoor activities. A primary school in the Xicheng district on the west side sent a message to parents that classes were canceled Tuesday.

Conditions were worsened by cold air that trapped pollutants near the ground, according to Zhang, the environment official. He said pollution from surrounding areas also blew into the capital.

Outside Beijing, readings for PM2.5 were was as high as 976 micrograms in the suburban region of Liulihe.

Inspectors from the Ministry of Environmental Protection found some construction projects flouted orders Monday to stop work that could raise dust, according to Xinhua.

Outside Beijing, reduced visibility due to heavy fog prompted authorities to close 1,553 highway sections in central, eastern and southern China, the Transportation Ministry said on its website.