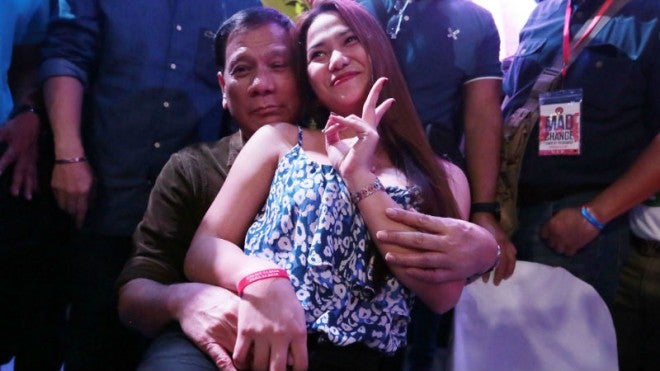 A female supporter of Davao City Mayor Rodrigo Duterte, presidential candidate of PDP-Laban, sits on his lap at the MAD for Change event at McKinley West Open Field in Taguig City on Nov. 29. GRIG C. MONTEGRANDE/INQUIRER

While PDP-Laban accepts that its 2016 standard-bearer is a self-proclaimed womanizer, the party president has only one request for Davao City Mayor Rodrigo Duterte: Don’t add more girlfriends to his already long list.

Saying Duterte’s womanizing is a thing of the past, Pimentel notes that what is important is the mayor’s stand on many issues, such as federalism, the fight versus criminality, and corruption.

“’Yun po ’yung mensahe ni Mayor Duterte. Yung messenger, nakapagmahal ng apat na babae, so decision na po ng botante ’yun. Will you listen to the mesage or will you ignore the message because you don’t like the messenger?” said the senator.

Asked if he found nothing wrong with having a leader who was known for being a womanizer, Pimentel reiterated that it was the mayor’s “life story” and urged the people to observe the new Duterte.

“Just continue to monitor the new Duterte; you will now start calling him Santo Rodrigo,” he said in jest.

“Just continue to monitor the pronouncements of Mayor Duterte, beginning today and compare it with his past pronouncements and you judge whether he’s a changed man and whether he has reached the level of a saint.”

Despite criticisms, Pimentel said the party would continue to support Duterte’s presidential bid.