Cabinet secretary urges US to avoid suspicion of Muslims 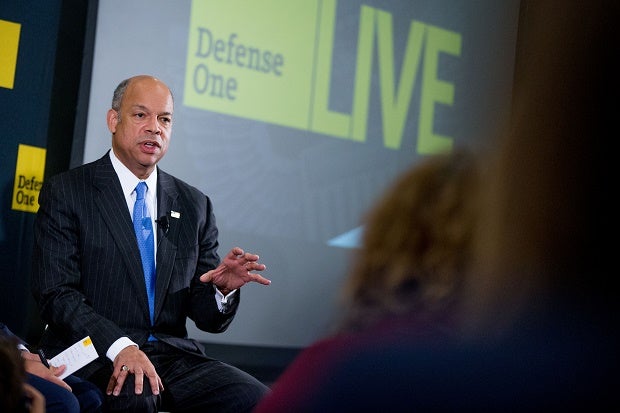 Secretary of Homeland Security Jeh Johnson speaks at a Defense One “leadership briefing” in Washington, Monday, Dec. 7, 2015, on the agency’s efforts to tackle growing terrorism threats in the US and abroad. AP

WASHINGTON — Vilifying and casting suspicion on American Muslims would threaten counterterrorism efforts and is un-American, the Homeland Security secretary said Monday at the nation’s second-largest mosque, as Republican presidential candidate Donald Trump proposed banning all Muslims from entering the US.

Secretary Jeh Johnson, after asking Muslims to report anyone in their communities suspected of turning toward violence, declined to respond directly to Trump’s proposal. Trump announced his idea during Johnson’s meeting.

“I don’t comment on what candidates for office say during this political season,” Johnson said afterward. He would not otherwise answer questions about Trump’s comments.

Johnson was participating Monday in a round-table discussion on civil rights and liberties at the All Dulles Area Muslim Society Center in Sterling, Virginia. He said the US government needs to take a new approach to counterterrorism and homeland security that includes outreach to Muslim communities.

“Terrorist organizations overseas have targeted your communities. They seek to pull your youth into the pit of violent extremism. Help us to help you stop this,” Johnson said. “If you see someone turning toward violence, say something. Say something to law enforcement, or to one of your community or religious leaders. When people self-radicalize, someone close to them is almost always in a position to see the signs.”

Johnson said, “Over and over again, in the life of this nation, there have been classes of people who, by virtue of their race, religion or nationality, exist on the margins of society, who are the object of prejudice, scorn and suspicion, and seek to win acceptance”

The discussion came on the heels of President Obama’s address to the nation Sunday about last week’s shooting attack in San Bernardino, California, which the FBI is investigating as an act of terrorism. Obama also vowed to destroy the Islamic State group.

The Department of Homeland Security has spearheaded the White House’s efforts to counter violent extremism in the United States.