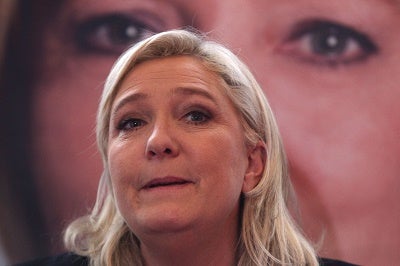 French far-right leader and National Front Party, Marine Le Pen, addresses the media during a news conference on Dec. 7, 2015, in Lille, northern France. France’s far-right National Front ran strongly in a first-round regional vote that was the first election since an attack by Islamic extremists left 130 dead in Paris. The National Front was leading in six of the 13 regions, including two where it was strongly ahead. AP

PARIS, France — France’s options are no longer as simple as left and right. The far-right, anti-establishment National Front has ridden a wave of anger over migration and extremist attacks straight into the political mainstream — where experts predict it will stay.

The party’s historic results in Sunday’s first round of regional elections were the latest in a series of electoral inroads, with scores that shamed and destabilized the traditional parties. The conservative party of former President Nicolas Sarkozy and President Francois Hollande’s Socialists — the long-standing anchors of French political life — scrambled to find ways to block the ascent of the far-right before the Dec. 13 final round.

The showing of the National Front — which won six of 13 regions — will energize leader Marine Le Pen’s planned bid for the presidency in 2017. In the traditionally Socialist northeastern region where she was running, the party won more than 40 percent of the vote. Her niece, Marion Marechal-Le Pen, had a similar showing in the southeastern Provence-Alpes-Cote d’Azur, a stronghold of the traditional right.

In a bid to stop a second-round National Front victory, the Socialist Party ordered its candidates to withdraw in those two regions so their supporters could give their votes to conservative candidates, a bitter exercise that Prime Minister Manuel Valls said was necessary.

“There is a choice between two visions of France,” Valls said Monday night on the TV station TF1 — that of traditional parties and that of the extreme right “which divides the French, tries to pit one against the other.”

Opponents say the National Front criticizes without offering solutions. The party, which currently has four lawmakers in parliament, is opposed to the European Union and the euro currency and fears that Muslim immigrants will supplant French civilization, replacing church bells with calls to prayer. But Le Pen says hers is the party of patriots — a message with special resonance in a France on edge since the Nov. 13 attacks in Paris that killed 130.

Marine Le Pen replaced her father, party co-founder Jean-Marie Le Pen, in 2011. She immediately set about changing its anti-Semitic image to make it less toxic to voters and undo its pariah status. In its former life, people were often too ashamed to reveal that they had voted for the National Front. Experts widely considered its performances, particularly under Jean-Marie Le Pen, as a way to punish mainstream parties.

“When a political party … keeps going through the glass ceiling you cannot say it is uniquely a protest party,” Camus said. Now, he said, voters are sticking to the party.

“We are incontestably in a country that has a perfect tri-party system.”

The far right’s long-standing calls for France to increase security and lock its doors to immigrants, especially Muslims, dovetailed this year with two attacks by extremists and the continuing influx of migrants to Europe. No other party was able to tackle the National Front on its own political turf.

Far-right parties have made inroads across Europe in recent years, from Greece to Hungary, Austria, the Netherlands and elsewhere. Le Pen heads a powerful far-right group in the European Parliament. All are feeding on the migrant crisis.

German Vice Chancellor Sigmar Gabriel said the National Front’s strong performance must be a “wake-up call for all democrats in Europe.”

“Standing together and solidarity in Europe are now more important than ever, including in dealing with the question of refugees,” Gabriel was quoted as telling the Bild newspaper.

Marine Le Pen attributes her party’s high scores to the nature of the political class, and the system it defends.

“I believe that the National Front’s incredible results are the revolt of the people against the elite,” she said Monday on RTL radio. “The people no longer support the disdain they have been (subjected to) for years by a political class defending its own interests.”

Analysts say that, despite the strong showing, the National Front is not guaranteed a stunning win in the final round.

“The National Front is an excellent first-round party,” said Camus. More difficult is “transforming itself into pole position in round two.”

But no one questions the falling away of the far-right stigma.

“I know more and more people who vote for the National Front, people that I know and that I meet,” said Parisian Migael Lalor, 44.

“Voting for the National Front is now something almost ordinary,” he said, adding that for him the party nonetheless inspires “dread” and “fear.”