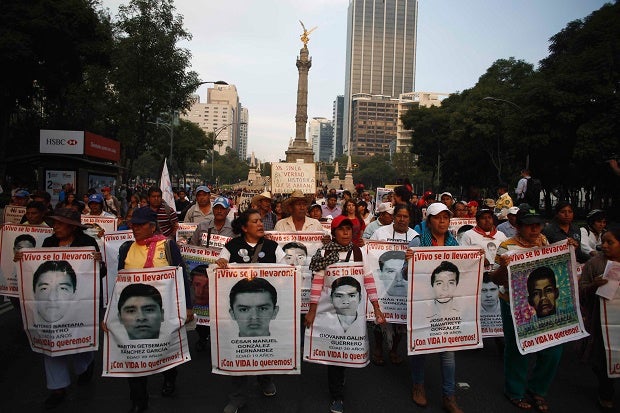 Relatives carry banners with pictures of some of the 43 missing students from a rural teachers college, during a march in Mexico City, Thursday, Nov. 26, 2015. AP File Photo

MEXICO CITY, Mexico—Satellite images have provided more proof that 43 Mexican students who vanished last year were not incinerated at a garbage dump as the authorities have stated, independent investigators said Monday.

READ: Mexican government affirms that missing students burned at dump
Experts from the Inter-American Commission on Human Rights have rejected the official conclusions that students were killed and burned at the landfill in the town of Cocula in September 2014.

Satellite images obtained from the attorney general’s office “show a location for only one fire that does not correspond to Cocula’s coordinates,” Alejandro Valencia, an attorney and member of the commission panel, told a news conference.

Prosecutors say police in the neighboring city of Iguala abducted the students after they seized buses and handed them over to a drug gang, which killed them and burned their bodies.

But parents of the students have voiced doubts over the official investigation, while the commission experts issued a report in September citing a fire specialist who found no evidence of a fire at the garbage dump.

The attorney general’s office has since agreed to conduct a new forensic investigation at the landfill with a team of international experts.

Authorities have also created a new investigative unit solely dedicated to the case, which has caused international outrage and turned into the biggest challenge of President Enrique Pena Nieto’s administration.