Just imagine, P67 billion is half of what Philippine casinos earn in a year. It is also the estimated net worth of former Sen. Manuel Villar’s business empire, good for 13th place on Forbes’ annual listing of Top 50 richest Filipinos.

Officials of the Bangko Sentral ng Pilipinas (BSP) estimate that there are P67 billion worth of old money still in circulation, some of which were introduced 30 years ago to replace the Bagong Lipunan series in 1985.

The problem is holders of this so-called “New Design Series” (NDS) currencies have only three weeks to spend or use them before they get demonetized, or lose their legal tender status starting on Jan. 1, 2016.

That means more than one in 10 currencies in circulation need replacement.

Malic said the central bank was still chasing after 422 million pieces of NDS currencies despite embarking on a massive information campaign since it launched the new banknote series in 2010.

Those who would be left with the old currencies in their wallets or vaults have one year—from Jan. 1 to Dec. 31, 2016—to convert their old money through the BSP offices or bank whether one was a depositor or not of that bank.

Malic said there was no maximum limit to the amount of currency to be exchanged and banks would not collect any fees. 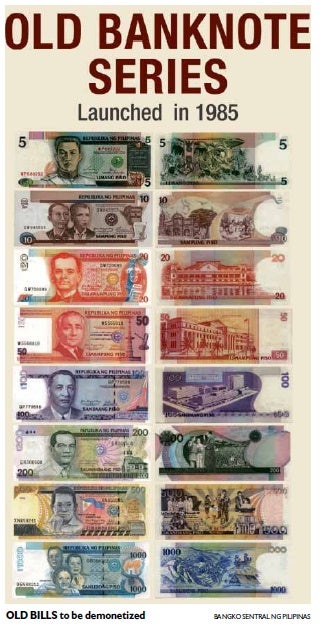 By Jan. 1, 2017, all NDS banknotes would just be another piece of paper—with no monetary value.

Malic said an exemption had been given to overseas Filipino workers (OFWs), who could exchange their NDS money beyond 2017 as long as they register online with the BSP the amount they have in their possession from October to December 2016.

They have one year from the date of registration to convert their money.

For cash held as evidence in pending court cases, Malic said, the BSP would give them exemption as long as these monies were properly registered with the BSP and would be converted after final resolution of the cases.

Malic said there was a need to change the banknote design to keep up with the latest trends in anticounterfeiting technology.

“Counterfeiters have become more high-tech so we have to move several steps ahead,” Malic said. “Central banks around the world change the designs of their currencies that have been in circulation for over 10 years.”

In checking whether a banknote is fake, Malic said, it is not enough to look at it but one should feel the paper (if it is genuine, it should be rough and does not glow under ultraviolet light); examine the watermark on the clear portion of the note; inspect the embedded red and blue security fibers; check the life-like portrait with “sparkling eyes”; and scan the lacework.