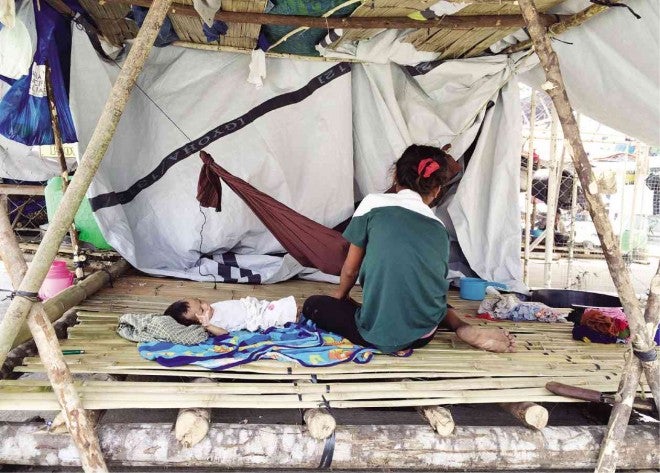 A WOMAN and her child are among almost 3,000 “lumad” who have been staying in makeshift tents in Tandag City in Surigao del Sur province for more than three months since they fled their communities after the killings.
NICO ALCONABA/INQUIRER MINDANAO

DAVAO CITY—All they want is to be home for Christmas.

More than three months after leaving their homes in five hinterland towns of Surigao del Sur province, the almost 3,000 “lumad” evacuees continue to stay at the sports complex in Tandag City. The lumad fled their houses after paramilitary men killed a lumad school executive and two tribal leaders in Lianga town on Sept. 1.

Charges have been filed against three of the suspects, who are members of the Magahat-Bagani paramilitary group, but none has been arrested.

Surigao del Sur Gov. Johnny Pimentel earlier said the Magahat-Bagani was created, trained, funded and armed by the military, an allegation that the Armed Forces of the Philippines repeatedly denied.

Pimentel said the suspects in the killing should be arrested, and the group disarmed and disbanded, so that the evacuees could return to their homes.

Some of the evacuees claimed they have received text messages warning them that they would be killed if they return to their homes.

Michelle Campos, daughter of slain lumad leader Dionel Campos, said although culturally lumad do not have Christmas, they celebrate this with Christian community members.

“It would be nice to celebrate Christmas in our homes,” Campos told the Inquirer by phone.

Campos said the police and military should arrest the suspects in the killings, and disband the paramilitary group.

“If these things are done, we might consider returning to our homes,” Campos said.

She also said they demand the immediate pullout of government soldiers in their communities.

Campos was one of at least 700 tribal people who joined the monthlong Manilakbayan from Mindanao to Manila, where they stayed in an effort to let the people and the government know about their plight. They returned to Mindanao even as the government failed to give their demands.

The suspects in the killings remain free even as the Senate committee for human rights, led by Senators Teofisto Guingona III and Aquilino Pimentel III, held a public hearing in Tandag City on Oct. 1.

Guingona, after the public hearing, said he was giving the police and military “decent enough time” to arrest the suspects. Nico Alconaba, Inquirer Mindanao