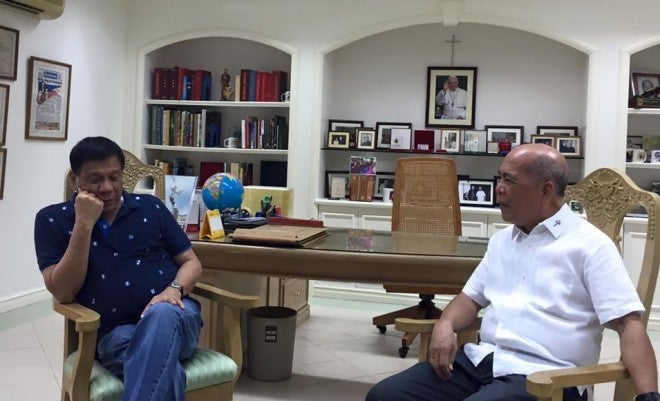 DAVAO CITY, Philippines—Showing a long black rosary to reporters, Mayor Rodrigo Duterte on Friday said he was advised by Davao Bishop Romulo Valles to not only stop using cuss words in his speeches but also to pray the rosary everyday for atonement.

“To atone for my sins, I should not talk anymore,” Duterte said at the opening of the joint Regional and City Peace and Order Council meeting here on Friday. “I will not cuss anymore because it is expensive,” he said.

Duterte has imposed a P1,000 fine on himself every time he utters cuss words. On Friday, he gave P2,000 to Caritas as he cussed again shortly after meeting Valles.

But Duterte, who grew animated when he talked about his favorite topics: drugs, growing criminality and “tanim-bala” (bullet-planting), found himself cursing again when he questioned the gun ban being imposed by the Commission on Elections (Comelec) during election time.

“I could not, for the life of me fathom why,” he said, referring to the need of the police and soldiers to secure an exemption, if they have to carry firearms during election time.

“Will the holdups and criminality stop during election time?” Duterte said. “How about the insurgency? Is there a cessation of violence during election time? If you’re worried about private armies, that’s the job of the police. Why would you take the guns away from them?” he said.

He cited an incident in Marahan, Bukidnon, when a policeman in civilian clothes boarded a truck and was shot by armed men. “When they finished with the first shots, they even took his (the policeman’s) own firearm and shot him more,” he said.

“What kind of a general invented the rule that the police could not carry firearms when they are not in uniform?” he said.

“I am tempted to take the DILG (Department of the Interior and Local Government) post and assign him to the latrine,” he added.

Duterte said if he wins the presidency, the first things that he will have to do is to stop drugs, criminality, corruption and start serious talks with insurgents. But he said to prepare for peace, he has to strengthen the military and order the creation of two or more divisions in the Philippine Army.

He said he would also order gunboats and more planes.

“I am still gearing for war in order to have peace,” he said. “How am I sure that the peace talks will succeed?” said Duterte, who has been packaging himself as a “friend” of the Left.

“Do you expect me to prepare when it’s already too late? To achieve peace, you must be prepared to go to war,” he added.

But Duterte said he will consider the use of arms only as a last option to solve the insurgency. “Nothing beats talking,” he said.

No middle ground for Duterte