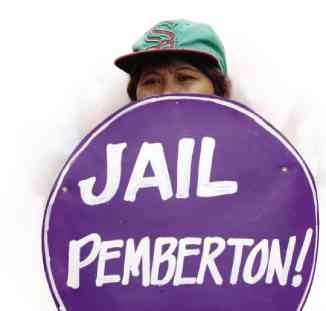 Mayor Rolen Paulino said many residents and businessmen here had been looking forward to the conclusion of Pemberton’s trial.

“We are looking forward to moving on as a city and as a people from the [Laude] incident that had greatly affected the image of the city and our country,” said Councilor Aquilino Cortez.

He said the United States Naval Criminal Investigative Service (NCIS) has been coordinating with local authorities to ensure that security protocols are at work where visiting US troops are allowed to spend their liberty.

Local bar and restaurant owners have also been encouraged to augment efforts to renovate their business establishments to deter crimes in anticipation of frequent arrival of American ships.

“From time to time, NCIS officials are here to give US ships commanders briefing on security measures to be taken up,” Cortez said.

But he said the city is on a “wait-and-see” situation if the US Navy and US Embassy in Manila would allow liberty of American soldiers.

He said he and Paulino have been in constant communication with NCIS officials to arrange the security guidelines for visiting US forces once the liberty ban has been lifted.

Cortez said businessmen are reluctant to renovate their clubs and shops until US authorities could guarantee that American soldiers would be allowed to spend their liberty in the city.

“If there will be no liberty for the US troops, the businessmen find it a waste of money to fix their establishments as part of security measures for the visiting servicemen,” he said.

Last year, the US Pacific Command (Pacom) canceled the rest and recreation activities of US servicemen in the Philippines after Pemberton was detained and charged with murder for the death of Laude.

On Tuesday, Judge Roline Ginez-Jabalde of the Regional Trial Court here sentenced Pemberton to between six and 12 years in prison after finding him guilty of the lesser offense of homicide in the death of Laude on Oct. 11 last year.

The US Pacom in June allowed American soldiers to leave their ships but their activities had been confined within the Subic Bay Freeport.

The Subic Bay Metropolitan Authority (SBMA), which manages the free port, has yet to receive an advisory from the US

Pacom on the possible lifting of the liberty ban on US troops, said Roberto Garcia, the agency’s chair.

But Garcia said SBMA is working with city officials to improve security inside the free port.

He said shore patrol officers would be deployed to the city under the Task Force Liberty, which was formed to ensure the safety of Olongapo residents and visiting Americans on shore leave.