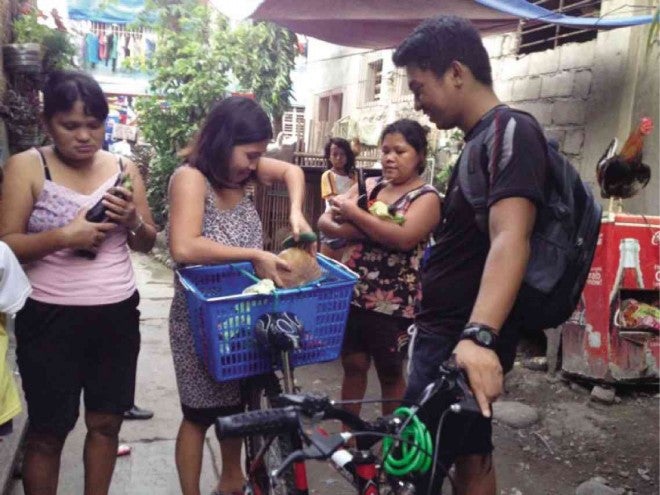 Mac Edsel Florendo (right, with backpack) collects unspoiled food from households in the city. One of Food Rescue Asean’s rationale is to cut food wastage in the country, starting in Dumaguete City, Negros Oriental.

For 20-year-old Mac Edsel Florendo, making a difference is not enough.

From stalls that throw away edible fruits and vegetables which are past their prime, volunteers in bicycles deliver the products to poor, homeless and low-income families in Dumaguete, Negros Oriental province.

This is the first food rescue initiative in Southeast Asia, after Florendo’s project proposal won the Youth Southeast Asian Leaders Initiative (Yseali) “Seed for the Future” grants competition in August. Yseali provides funding of up to $20,000 for the region’s most promising young leaders to carry out projects that improve their communities.

“It’s quite ironic to be in a world where many people are hungry but many food are also wasted. Farmers did not plant so that what they’ve sown will one day be thrown away. They sow to eat and feed what they will reap,” Florendo said.

Food Rescue Asean has started its mission in rescuing food from “being deprived of their purpose.”

Since Oct. 22, Florendo and his two volunteers have been collecting on bicycles more than 20 kilos of fruits and vegetables every day from the stalls at Doña Milagrosa Farmers’ Market in Dumaguete and some willing households.

They deliver these to the Poblacion 8 barangay hall in the city, where village officials distribute these to the indigents in the area.

Florendo also delivers the vegetables and fruits to the Dumaguete Youth Home: Shelter for Boys in Talay, Dumaguete, where these are cooked for supper of the 11 boys there.

Vendor Rogen Olbos says Florendo’s afternoon visits have lessened the weight of their trash cans. “When he visits, we usually give him chayote, Baguio beans, eggplants and carrots,” he says.

The vegetables are still edible, Olbos says. “It’s just that, when the skin of a sayote has brown scratches, people will most likely not buy it. In the past, we would just throw them away. So now, it’s good that what we considered waste can be someone else’s meal.”

Before he started the food rescue operations, Florendo surveyed grocery stores and asked their personnel what they did to the unsold fruits and vegetables. “They throw them away. No one gains money. No one eats the food. Throwing them benefits no one,” he says.

City administrator William Ablong encouraged Florendo to do a study on food wastage since there was no existing data on the matter in the country. “Once I graduate from college, I might pursue the study and then register Food Rescue as an official nongovernment organization,” Florendo says.

In the survey conducted by Social Weather Stations during the first quarter of 2015, the self-rated food poverty rate in the Visayas was at 45 percent. Among basic needs, the lack or absence of food is what makes Filipinos say that they are poor, Florendo notes.

“This project seeks to lessen the people who are hungry,” he adds.

However, Florendo clarifies that Food Rescue Asean is not a feeding program. “Our primary purpose is to rescue food from being wasted. Feeding people is just a fruit of that purpose.”

Although Florendo has not received any funding for the project yet, he started the wheels rolling on Oct. 22, with a team of three collecting and delivering food every day from 4 p.m. to 5 p.m.

“I remained faithful with the time frame in my proposal, so I’m still using my own money for the bikes,” says Florendo, who also wants to promote the culture of cycling in the city through the program. Sillimanians Shamah Bulangis and Marie Alven are his constant help in biking to rescue food.

Florendo expects more volunteers during the second semester. Once the number increases, he plans to tap more stores and markets to be onboard the program.

They are still testing the waters, but are hoping that more cities in the country will adopt the program. “I would highly encourage those who share the same conviction to start a Food Rescue organization in their own place,” Florendo says.

Food Rescue Asean draws inspiration from Boulder Food Rescue in the US state of Colorado, an organization that has been helping reduce food waste since 2011. Florendo met Hana Dansky, founder of Boulder Food Rescue, during his Ysaeli exchange program in the United States last summer.

“I was amazed at how it works in the States. I thought to myself, ‘There are even more hungry people in our country that need programs like this.’ So I decided to make this project a pasalubong to our country after the exchange program—with or without the grant,” Florendo says.

Dansky encouraged Florendo to pursue the idea of bringing Food Rescue to the Philippines and to Asia.

“Currently, I also have partners in Kuala Lumpur, Malaysia, who are doing Food Rescue Malaysia. I met these people during the Ysaeli program. We hope that all Asean member-countries will do the same,” Florendo says.

Florendo and his team of three now wait for another afternoon to rescue food and feed people, one bicycle ride at a time.