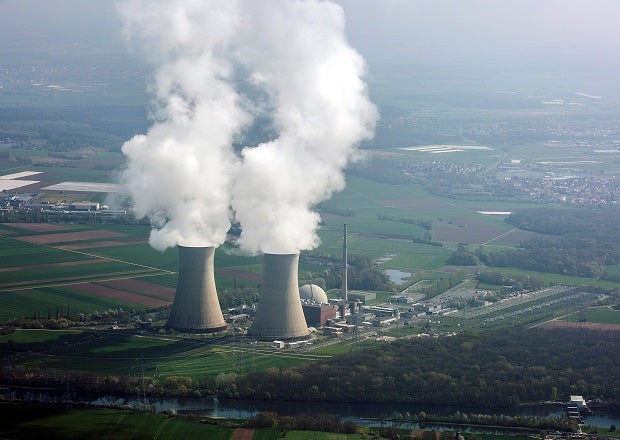 This April 23, 2015 file photo shows an aerial view of the nuclear power plant in Grafenheinfeld, southern Germany. Bavarias environment ministry said Sunday, June 28, 2015, Germanys oldest remaining nuclear reactor has been shut down, part of a move initiated four years ago to switch off all its nuclear plants by 2022. dpa via AP FILE PHOTO

PARIS, France—As delegates at a Paris summit haggle over how to curb global warming, the role of nuclear energy in limiting climate-changing emissions is the subject of fierce debate between champions and critics of atomic power.

Energy production accounts for 35 percent of the greenhouse-gas emissions that fuel global warming, with 25 percent coming from electricity generation alone.

Like solar panels or wind turbines, they only indirectly generate emissions during their life cycle, namely in the construction of reactors and the extraction of the uranium they use as fuel.

The Intergovernmental Panel on Climate Change (IPCC) estimates the median value of emissions from nuclear plants at 16 grams of CO2-equivalent per kilowatt hour, about as much as a wind turbine and far less than the footprint of plants that burn fossil fuels.

The IPCC, which tracks global warming for the UN, puts nuclear power on a par with renewables among the low-carbon energy sources whose share of electricity generation must grow to 80 percent by 2050—compared with 30 percent today—if global warming is to be capped at 2 degrees Celsius over pre-Industrial Revolution levels.

The IPCC’s apparent endorsement of nuclear energy, which features in nearly all the scenarios it presents in its recommendations on curbing warming, has incensed anti-nuclear groups.

Dogged by security concerns, the share of nuclear power in global electricity generation has been in steady decline over the past two decades, falling from 17 percent in 1993 to 11 percent in 2012, according to the IPCC.

For the International Energy Agency, nuclear power increases energy security and sustainability by being “one of the world’s largest sources of low-carbon energy” with an average output to rival “4,000 windmills.”

The OECD’s energy agency estimates that nuclear power has avoided over 60 gigatonnes of CO2 emissions since 1980, assuming that that power would otherwise have been produced by burning gas or coal.

To have a good chance of limiting global warming to 2 degrees Celsius the installed nuclear capacity would have to grow from 396 gigawatts currently to 930 gigawatts by 2050, an investment of $4.4 trillion (four trillion euros), the OECD said.

For the Nuclear for Climate initiative, which was set up by the French Nuclear Energy Society to promote atomic energy as a panacea to climate change, nuclear is “part of the solution” and should therefore “have access to climate finance schemes such as the (UN) Green Climate Fund.”

‘Every phase is polluting’

In France, which relies heavily on nuclear power, state-controlled electricity utility EDF says nearly 98 percent of its power was free of carbon emissions in 2014.

EDF said its emissions amounted to 17 grams of CO2-equivalent per kilowatt hour, which it claimed was “20 times less” than the European average.

A report by PricewaterhouseCoopers consulting firm found EDF had reduced its CO2 emissions by 13 million tonnes, or 21 percent, last year by reducing power generation from fossil-fuel plants in favour of nuclear power.

But not everyone agrees that more nuclear is the answer.

A report by the WISE-Paris research agency commissioned by several NGOs, including Greenpeace, concluded that the safety concerns over nuclear power—as exemplified by the 2011 Fukushima disaster—rule it out as a viable energy source.

Highlighting the exorbitant cost of nuclear power compared with renewables, the report also accused the nuclear industry of overstating its contribution to the fight against climate change.

“From uranium mines to nuclear waste, including radioactive and chemical pollution from nuclear reactors, every phase of the nuclear cycle brings about pollution,” the report said.

The researchers made the case for energy saving and greater investment in renewables instead.

France, it said, had the potential “to produce three times as much renewable electricity as the current demand for power.”

Read Next
QCRTC stops DOTC, LTFRB from issuing permits to operate Uber, GrabCar
EDITORS' PICK
Vietnam’s ‘crazy guy’ aims to save ocean from waste
Marcos-era elections: Not what his son signed up for
WHO says no evidence healthy children, adolescents need COVID-19 boosters
Gear up and get ready to play with Yamaha Mio Gear
Acer starts the year off strong with the Aspire Vero National Geographic Edition
Over 3 Million worth of prizes to be won at Smart Padala’s SENDali Manalo Promo!
MOST READ
‘Sampal sa gobyerno:’ Drilon wants unvaxxed PAO chief barred from working
Vice mayor slams Vico Sotto for turning Pasig into a ‘puro palabas’ city
Jose Manalo’s son Benj pays tribute to late mother: ‘You’re a testimony of God’s love’
Guevarra to Acosta: Obey rules on unvaccinated
Don't miss out on the latest news and information.