Ex-Massey CEO guilty in US mine blast killing 29 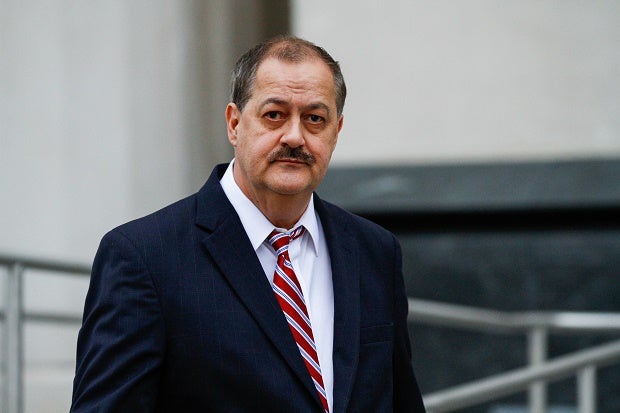 Former Massey Energy CEO Don Blankenship departs the Robert C. Byrd United States Courthouse following the second day of jury deliberation in Charleston, W.Va., Wednesday, Nov. 18, 2015. Blankenship is charged with conspiring to break safety laws at the mine and defraud mine regulators, and with lying to financial regulators and investors about company safety in the years before an explosion killed 29 men at the Upper Big Branch mine in southern West Virginia in 2010. AP Photo

WASHINGTON, United States—The former head of Massey Energy was convicted Thursday of conspiracy in a 2010 deadly coal mine explosion, one of the worst mining disasters in US history.

A jury in a West Virginia court found Don Blankenship “guilty on a federal charge of conspiracy to wilfully violate mine health and safety standards,” an attorney’s office statement said.

Blankenship was the chief executive of Massey Energy in April 2010 when a powerful explosion ripped through the Upper Big Branch mine in West Virginia, killing 29 men.

“This is the first time that I am aware that the chief executive officer of a major corporation has been convicted of a workplace safety crime,” US Attorney Booth Goodwin said in the statement.

“This is a landmark day for the safety of coal miners, and not just coal miners, but all working men and women,” he added.

“The jury’s verdict sends a clear and powerful message: It doesn’t matter who you are, how rich you are, or how powerful you are—if you gamble with the safety of the people who work for you, you will be held accountable.”

Blankenship faces up to one year in prison and a fine. He is scheduled to be sentenced on March 23 next year.

The mine disaster—the worst in four decades in the United States—sparked national outrage.

President Barack Obama at the time blamed the disaster on “a failure, first and foremost, of management,” but stressed there was “also a failure of oversight.”

In 2011, an independent investigation found that Blankenship had failed to implement proper safety standards at the mine and concluded the accident “was the result of failures of basic safety systems.”

Massey Energy was acquired by Alpha Natural Resources in 2011. In December that year, the US Justice Department announced that Alpha had agreed to pay a record $209 million to settle a criminal probe into safety violations at the Upper Big Branch mine.

The Massey mine accident was the worst US coal mine disaster since an explosion killed 38 workers in Kentucky in 1970.

5 dead, 4 missing in coal mine collapse