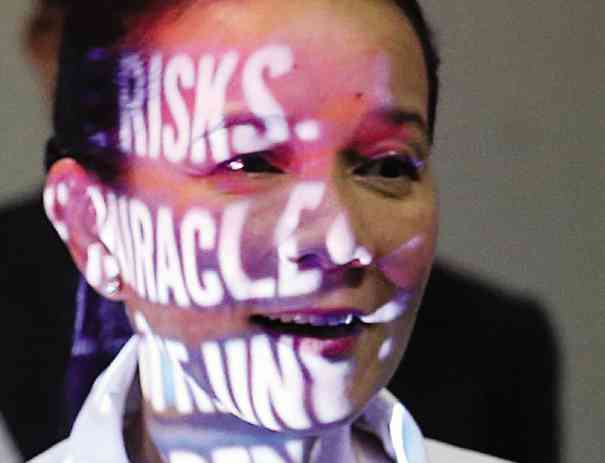 WRITING ON THE WALL The words “risks” and “miracle,” projected on the face of presidential candidate Sen. Grace Poe during a PowerPoint presentation at a presscon on Thursday, may well be the keywords to her quest for the presidency, under siege by a string of DQ cases. RAFFY LERMA

The battle for the elimination of Sen. Grace Poe from next year’s presidential election moves to the Supreme Court next week, after the Senate Electoral Tribunal (SET) on Thursday affirmed its Nov. 17 ruling that Poe is a natural-born Filipino.

The nine-member SET maintained its 5-4 vote and junked the motion for reconsideration brought by petitioner Rizalito David, who had sought the ouster of Poe from the Senate on the grounds that she was not a natural-born citizen of the Philippines.

“Motion denied. Same voting,” Sen. Vicente Sotto, one of the senators on the SET, told reporters in a text message after the tribunal’s meeting at a hotel in Pasay City.

Sen. Loren Legarda, a member of the SET, said the decision came in just one minute, with the members keeping their Nov. 17 votes to reject David’s contention that Poe should be considered stateless because she was a foundling.

Poe was abandoned in a church in Jaro, Iloilo province, shortly after birth in 1968.  She was later adopted by the late movie actor Fernando Poe Jr. and his wife, movie actress Susan Roces.

‘It only took a minute’

“There was no change. We almost did not talk about it. There was no more voting. It took a minute,” Legarda said.

She said the members of the tribunal had a longer discussion about the United Nations arbitral tribunal’s recently concluded proceedings on the Philippines’ petition to invalidate China’s claim to almost the entire South China Sea.

“Our discussions were exciting because we talked about international law,” Legarda said.

Sen. Nancy Binay, a daughter of the Vice President, joined the three Supreme Court associate justices on the tribunal—Teresita Leonardo-de Castro, Arturo Brion and Antonio Carpio—in the vote against Poe.

The case decided by the SET is separate from the four cases in the Commission on Elections (Comelec) seeking to disqualify Poe from the race for Malacañang.

Poe’s camp thanked the SET for the favorable ruling.

“Senator Poe is grateful to the SET members for continuing to uphold the rights of foundlings, Valenzuela City Mayor Rex Gatchalian, a spokesperson for Poe, said in a statement.

Gatchalian said the SET ruling was “a clear indication that Senator Poe is a natural-born Filipino.”

“In the coming days, we hope the Comelec does the same and upholds the rights of foundlings,” he said.

“There’s no Plan B, C, D or E. There’s only one plan,” Escudero told reporters in Iloilo City.

He said only the Supreme Court could rule with finality on a disqualification case against a candidate.

The filing of cases against Poe is meant to weaken her candidacy, he added.

Poe’s supporters planned to hold a rally in front of the Comelec office in Iloilo today to protest the Comelec Second Division’s decision on Tuesday to disqualify her from next year’s elections on grounds that she did not meet the 10-year residency requirement for presidential candidates.

Bayan Muna Rep. Neri Colmenares, a senatorial candidate on Poe’s ticket, said the protest would be joined by groups and individuals supporting Poe’s fight for the rights of abandoned children.

In a brief interview, Carpio said David’s motion for reconsideration carried no new issues for deliberation.

“No new issues were raised. We just affirmed our own votes,” said Carpio, the SET chair who held that Poe “failed to prove that she is a natural-born Filipino citizen.”

Carpio said the justices who voted against Poe would inhibit themselves from the case once it reached the Supreme Court.

Thursday’s ruling rejected David’s claim that the majority vote was a political decision.

“Indeed, aside from ascribing unfounded and baseless ill and improper motives to the senator-members who composed the majority and citing some opinion columns and tabloid reports that carry no evidentiary weight whatsoever, petitioner utterly failed to present any new issue or arguments that would warrant a reversal of

On the minute resolution, Carpio wrote over his signature: “I reiterate my dissenting opinion.”

De Castro wrote the same over her signature.

Brion and Binay both wrote over their signatures: “I reiterate my dissenting vote.”

David’s lawyer Manuelito Luna said the petitioner would raise the case to the Supreme Court early next week.

In a statement, Luna expressed confidence that the senators who voted in Poe’s favor would be “shamed” when the Supreme Court ruled on the case.

“We’re expecting it since the majority doesn’t know how to read the Constitution. On Monday or Tuesday, [we will file a petition for] certiorari in the Supreme Court, where they will be reversed and shamed for grave abuse of discretion,” he said.

He asserted David’s position that the ruling was in violation of the Supreme Court’s ruling in a 1991 case, in which the court warned lawmakers who served on electoral tribunals against making political decisions in electoral challenges brought before them.

The doctrine stemmed from the Supreme Court’s ruling in a case that Rosette Lerias filed against the House of Representatives Electoral Tribunal and Roger Mercado, her rival for the Southern Leyte congressional seat at the time.

In that decision, the Supreme Court warned politicans against making political decisions on electoral protests, saying “they must resolve election controversies with judicial, not political, integrity.” With reports from Marlon Ramos in Manila; and Nestor P. Burgos Jr. and Carla P. Gomez, Inquirer Visayas