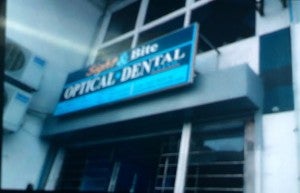 The Sight and Bite Optical and Dental Clinic in Cubao, Quezon City, was destroyed by fire, which killed four people. (Photo by Jodee Agoncillo, INQUIRER)

MANILA, Philippines — A family of four died of suffocation after a part of their rented commercial unit in Quezon City where they were sleeping was destroyed by fire on Thursday dawn.

The Quezon City Fire District placed the area under first alarm at 3:18 a.m. and declared a fire out at 5:05 a.m.  Twelve fire trucks came, the incident report stated.

The fire, he said, apparently started at the “kitchen” of the Sight & Bite Dental and Optical Clinic owned by the family located at the LHC Square, 15th Avenue, at the corner of the Main avenue in Barangay Roque.

Rodrigo Bigao, security guard of the building, immediately sought the help of the Bureau of Fire Protection, after being informed by neighbors, the report said.

The fire might have been caused by gadget overload or the overcharging of gadgets, Fernandez said, as indicated by the burnt appliance plugged into one of the sockets. The burnt items included a rechargeable flashlight being charged on top of the refrigerator.

The other parts of the two-story building were not affected but the smoke coming from the ground floor suffocated the four who were sleeping on two foldable foams and a double deck at the 3.5-x-9-meter mezzanine, he said.

The four were already unconscious when the BFP Emergency medical services team came for first aid. The victims were brought to the East Avenue Medical Center where they were declared dead on arrival.

Joshua Bucad, the family’s only surviving member, was at his office when the fire happened.

Investigators already ruled out the possibility of foul play since there was no forced entry in the area. An estimated P100,000 worth of properties and valuables were destroyed, the BFP report said.

Fernandez advised the public to refrain from sleeping in commercial units as these should be open only during office hours and did not usually meet the standards of a residential building. Residential areas higher than three stories should already have smoke detectors and sprinkler system, he said.

The remains of the victims lie at the La Funeraria Paz in Sucat, Parañaque.  SFM