P1.3B in cops’ bonuses out this week 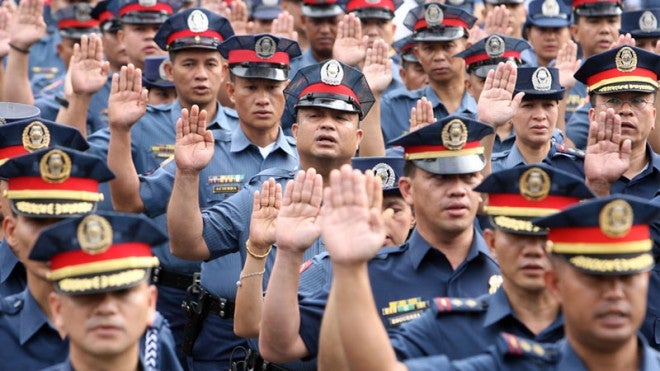 Police personnel can count on receiving an early Christmas gift, as the P1.3 billion budget for their performance-based bonus (PBB) is expected to be released within the week.

Chief Supt. Joel Victor Canapi, Philippine National Police deputy director for comptrollership, yesterday said that the Department of Budget and Management (DBM) has indicated that the funds for the bonuses would be released soon.

“But once it’s released, it will still follow the process of payment to the individual police personnel,” he told reporters.

Canapi explained that the bonuses owing to PNP employees and members included, besides the performance-based bonus, the productivity enhancement incentive (PEI) and “other collateral allowances” which cover replacement clothing and subsistence grants.

Around 149,275 PNP personnel are eligible to collect from the P1.3-PBB, which is actually for their performance in 2014. The PBB for their 2013 performance was released earlier this year.

Canapi admitted that there have been delays because of the “tedious” process of calculating individual bonuses and coming up with a report ranking units and personnel with corresponding bonus amounts.

“The big number of PNP personnel is also another factor,” he said.

Canapi explained that there are three categories for the grant of the performance bonus—best, better and good—and a ranking is required for each attached agency under the Department of Interior and Local Government, each unit under the PNP, and each individual within that unit. The bonus amount for each eligible recipient differs, depending on these categories.

Meanwhile, Canapi said the PEI bonus was distributed last June 15 through the ATM accounts of all eligible PNP personnel.