“Pastillas Girl” Angelica Yap on Tuesday turned over to the National Bureau of Investigation (NBI) the cell phone of her mother who was shot dead in Caloocan City on Sunday night.

Accompanied by her relatives, Yap asked the NBI for help in identifying and catching the killer of her mother, Maria Theresa Hernandez.

She also provided the bureau with the names of possible suspects although she declined to say what their motives could be.

In her statement to the NBI’s Death Investigation Division, Yap said that her mother had received death threats on her cell phone before she was shot in the head at close range by a man at an eatery at the corner of Tagaytay and Cabatuan Streets. 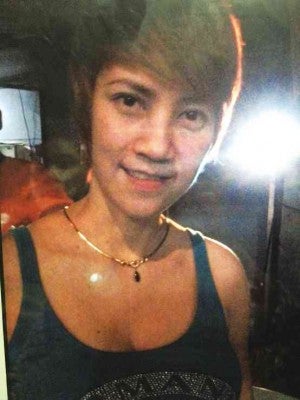 The 43-year-old Hernandez, a councilor of Barangay 127 in Caloocan City, had just come from church and was waiting for her order when she was shot at 9:30 p.m. on Sunday. She died at 12:41 a.m. the next day.

According to Yap, her mother had been worried about the death threats although she tried to hide it.

Earlier, a relative of the victim asked the Caloocan police to investigate her two former boyfriends, saying Hernandez had not been on good terms with both men since she broke up with them.

The relative, identified only as “John,” said one of the victim’s ex-partners had even told her: “If you cannot be mine, no one else will have you.”

A text message sent to Hernandez also warned her that she would be dead before Christmas.

John added that one of the former boyfriend’s current partners had sent threatening messages to Hernandez out of jealousy.

The police have tagged the victim’s current boyfriend as a person of interest although they withheld his name pending the results of their investigation.

ADVERTISEMENT
Read Next
Did you know: National Volunteer Month
EDITORS' PICK
Experience clearer calls nationwide with Smart VoLTE
Lorenzana orders review of protocol in handling slain rebels’ remains
PNP probing influx of marijuana in NCR, adjacent provinces
Duterte: May Bonifacio inspire all Filipinos amid COVID-19 pandemic
Arthaland’s property management arm utilizes Amazon Web Services to enhance delivery of service
Smart Prepaid encourages the youth to take their passions to the next level and ‘Live GIGA’
MOST READ
‘What is mine is hers,’ says Matteo on sharing finances with his Popstar Royalty wife
Lorenzana orders review of protocol in handling slain rebels’ remains
DOF to PITC: Return P1 billion in interest on ‘idle’ funds
23 police officials get new assignments in PNP’s latest reshuffle
Don't miss out on the latest news and information.