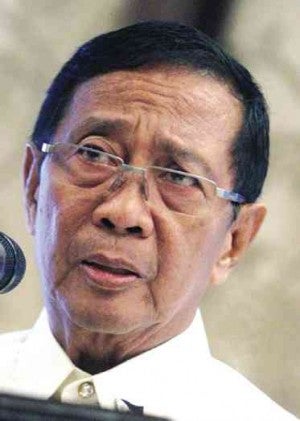 Every man has a right to build, keep and be favored with a good name as the court recognized that slander and libel are actionable wrongs, whether as criminal offenses or tortuous conduct, the Supreme Court said in a 2004 case.
In that ruling, the high court upheld the libel charge filed by then Makati Mayor and now Vice President Jejomar Binay against former Vice Mayor Roberto “Bobby” Brillante.
On the same case, in a recent ruling, Binay again won against Brillante.
In a decision dated Nov. 13, the special 11th division of the appellate court dismissed the petition filed by Brillante questioning the hold-departure order issued by the Makati City Regional Trial Court Branch 145 in June 1992 over his libelous statements against Binay and his aide Francisco Baloloy in 1988.
The appeals court said the lower court was correct in preventing the flight of Brillante over his failure to pay the fine imposed upon him in the libel case.

“With Brillante’s failure to pay the pecuniary liabilities imposed upon him, the RTC acted within the ambit of law when it denied his
motion to lift the HDO,” the appeals court said in a ruling written by read the Associate Justice Pedro Corales.

“To countenance such refusal and simply allow Brillante to travel abroad would render nugatory the imposition of subsidiary penalty in case he fails to pay the fine imposed upon him,” the court stressed.
The case for five counts of libel stemmed from an open letter written by Brillante in 1988 addressed to then President of the Republic of the Philippines Corazon C. Aquino discussing the alleged participation of Binay, then the OIC Mayor and a candidate for mayor, and Dr. Nemesio Prudente, then President of the Polytechnic University of the Philippines, in a supposed assassination plot against Augusto Syjuco, another candidate for Mayor of Makati at that time.
Records showed that Brillante caused the publication of the said letter in several newspapers and even held a press conference in Jan. 1988 where he accused Binay not only of plotting the assassination of Syjuco, but also of terrorism, intimidation and harassment of the Makati electorate.
Baloloy, who was identified in the open letter as among the persons who attended the meeting organized by Binay and Prudente to plan the assassination of Syjuco, likewise filed a criminal complaint for libel against Brillante.
The Makati RTC convicted Brillante of libel, finding malice in the statements that he claimed were based on intelligence information. The CA upheld the conviction.
In Oct. 2004, the Supreme Court (SC) affirmed the criminal conviction of Brillante and ordered him to pay Binay and Francisco Baloloy P500,000 for moral damages with subsidiary imprisonment in case of insolvency.