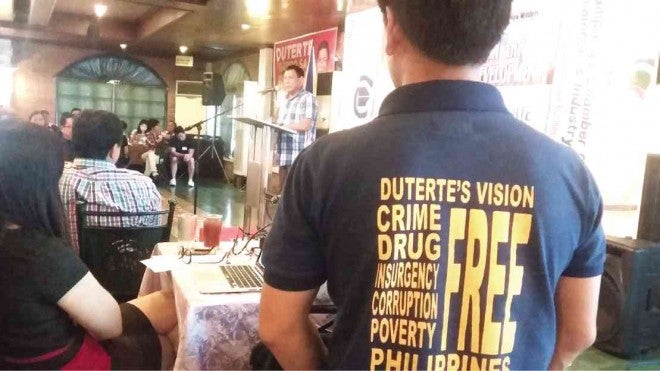 DAVAO CITY – Mayor Rodrigo Duterte said Filipinos could expect a stronger anti-corruption campaign under his presidency, saying he would do anything to put a stop to fraud in government.

“If I will become president, corruption has to stop,” he said.

Duterte also made a similar statement when he graced the opening of the Munato Festival in Sarangani province on Friday.

Toward the end of his 41-minute talk there, Duterte had said corruption has been bleeding the nation dry and pushing Filipinos deeper into poverty.

He did not elaborate on the things that he would do to fight corruption, aside from saying it would be a more vigorous campaign against unscrupulous government officials.

Asked here if he could really do it, Duterte spoke of his experience in fighting corruption when he was still working for the Tanodbayan. The Tanodbayan was the predecessor of the Ombudsman.

“Once upon a time, I was one of only two Tanodbayan investigators in Mindanao,” he said.

Duterte also reacted anew to an investigation the National Bureau of Investigation (NBI) has been conducting here on claims he has been threatening to have killed village chiefs who were not supportive of his programs.

Duterte has been known to castigate officials, who would deviate from what he thought were policies that would be beneficial to the people.

He would also always tell them not to shortchange the public.

“Don’t grab from people’s mouth what they are about to eat. What is theirs is theirs,” he would remind officials at all times.

The Davao City mayor said he will also abolish the labor-contracting scheme that the Department of Labor and Employment (Dole) had adopted.

“I want to stop the labor contracting policy because it does not give security of tenure to employees,” he said.

Reminded that labor contracting is favored by capitalists, he said: “I don’t care if capitalists won’t vote for me.”

He said he wanted those earning P25,000 and below exempted from paying income tax and that he would work to raise wages.

Aside from corruption, Duterte said “criminality has to go (also).”

Duterte asserted it was time to instill fear in the law and for a more serious anti-drug campaign.

“We have lost a generation to drugs,” he said, adding that he could never tolerate drugs and criminality.

Duterte said to fight criminality, he would “use the military and the police” in a way similar to what he tasked them to do here.

In August, Duterte said that “if the drug threat persists, we could be the next Mexico.”

Mexican drug cartels often use violence and money to dominate the global wholesale illicit drug market. It started controlling the cocaine trade in the United States and since 2007, accounted for about 90 percent of it, according to data from the US Drug Enforcement Agency.

“We have the same temperament, even the same patrons,” he said then, adding that like Mexico, the country’s illegal drug trade is now also dominated by large syndicates – which use their money and influence to skirt prosecution.

“In Manila, almost all (policemen) are on the take. When they are called for an operation, many of them would squeal. They will warn criminals because they are on the take,” he added.

And even if they were in detention, he said drug lords continue with their illegal trade, citing the discovery of the activities of convicted drug lords inside the National Bilibid Prison (NBP).

Duterte also earlier lamented what he said was the Aquino government’s seeming neglect of the growing drug problem that it was not even included in the recent state of the nation address delivered by the President. CDG