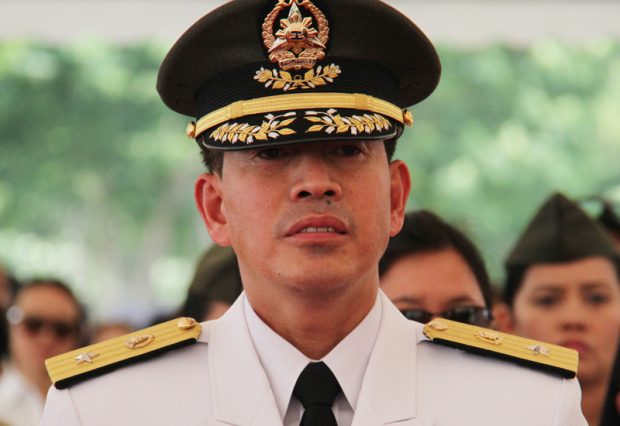 Armed Forces of the Philippines chief of staff Gen. Hernando Iriberri and two other senior military and police officials were named in a complaint filed with the Ombudsman for allegedly smuggling into the country 5,500 rounds of howitzer ammunition this month.

In a 24-page complaint, retired Chief Supt. Romulo Maningding also accused Iriberri and others of violating Republic Act No. 3019, or the Anti-Graft and Corrupt Practices Act, for providing “undue benefits” to Mechanical and Chemical Industry Corp. (MKEK), a state-owned Turkish company which won the bidding for the supply of the artillery rounds.

Maningding, a member of Philippine Military Academy Class of 1978, also sought the preventive suspension of the police and military officials.

In his complaint, Maningding said his company, Roferma Enterprises, was designated as the initial local partner of MKEK in April 2012.

He said MKEK and Roferma were awarded the contract to supply 4,500 rounds of 105-mm howitzer ammunition for the Army and another 1,000 rounds for the Navy in October 2014.

However, the Turkish firm arbitrarily ended its partnership with Roferma on April 1 and named System Nomics Inc., represented by Mendoza, as its new local agent, Maningding said.

Because of this, he wrote a letter to Sarona, the chief of the Firearms and Explosives Office (FEO) of the Philippine National Police, on Aug. 13 seeking the revocation of the two permits to import the ammunition.

On Sept. 1, he also sent a similar letter to Iriberri informing him that the FEO had revoked the permits to import the howitzer rounds after MKEK appointed a new local partner.

To resolve the issue, he said MKEK then designated another local company, Caballo Negro Industriya Corp., owned by Del Mundo, to “assist” System Nomics in processing the documents for the importation of the ammunition.

He said Yucoco, the military logistics chief, then asked the PNP to “re-issue” the import permits to System Nomics since MKEK had already severed its ties with Roferma.

But Chief Supt. Elmer Soria, the chief of the PNP Civil Security Group, reportedly told Yucoco that his request “could not be favorably considered” as the documents were originally issued to Roferma.

Despite the lack of necessary documents, Maningding said Iriberri and the others allowed the entry into the country of the howitzer ammunition through the Port of Subic in Zambales.

READ: The rapid rise of Iriberri to AFP leadership

Worse, some unscrupulous officials of the Bureau of Customs released the artillery rounds without the necessary permits and documentary requirements, he claimed.

He said Sarona also “irregularly issued” the “unnecessary” permit to transport to Mendoza and Del Mundo which allowed them to request for the release of the imported ammunition.