The rapid rise of Iriberri to AFP leadership

Lieutenant General Hernando Iriberri took the helm of the Armed Forces of the Philippines on Friday at a time when the military is shifting to territorial defense amid China’s aggression in the West Philippine Sea (South China Sea).

Iriberri will be the sixth AFP chief under President Benigno Aquino III. His retirement date, April 22, 2016, will be at the height of the preparations for the May 2016 elections. Whether he would be extended or not has yet to be known.

But in Aquino’s speech, he hinted a possible term extension as he challenged Iriberri to an orderly elections next year.

(Lt. Gen. Iriberri, this is the challenge you are facing now: Continue what Gen. Catapang and the others before him have started, and further raise the quality of service of our soldiers. Let us remember: The elections are drawing near. It is included in your mandate to make sure that the elections will be peaceful and orderly. This will be your way of paying back the support and concern given to you by the Filipino people, our Bosses.)

The newly installed AFP chief does not have close ties with Aquino but he is quite known for his connection with Defense Secretary Voltaire Gazmin, who is said to have a big influence on Aquino’s military appointments.

Iriberri was Gazmin’s spokesman when he was Army chief in 2000. He was also the latter’s senior military assistant from July 2010 to January 2013.

A member of the Philippine Military Academy Class of 1983, Iriberri was the first in his batch to become a division commander. He was named the Army’s 7th Infantry Division in July 2013 after serving as brigade commander of the Army’s 503rd Brigade in Abra from January to July in 2013.

He would also be the first to get a three-star rank in his batch. When he was named Army chief last year, Iriberri beat officers more senior than him — AFP chief Gen. Gregorio Catapang of PMA Class 1981 and then Special Operations command chief Lt. Gen. John Bonafos of PMA Class of 1982. 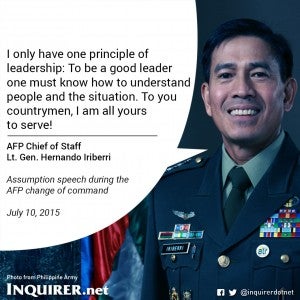 With his appointment as AFP chief, Iriberri also beat other officers more senior than him, and even those closer to Aquino.

Delgado and Visaya have close ties with Aquino. The former was a member of the Presidential Security Group during the time of President Corazon Aquino. He was also a part of the PSG when her son Benigno assumed office.

Visaya, meanwhile, was the commander of Army’s 69th Infantry Battalion based in Tarlac and Pampanga during the Hacienda Luisita massacre in 2004.

Iriberri, together with Catapang and Gazmin, was recently on the news when the P6.5 billion Shore-Based Missile System project for the AFP modernization program, an item that would have been crucial to the country’s defense to the West Philippine Sea (South China Sea), was shelved and marksmen rifles, chemical-biological-radiological-nuclear protective gear and long-range sniper weapons systems were instead prioritized.

The report by Inquirer early this week said the change was allegedly to earn commissions, to which Iriberri denied, saying it was a “pure lie.”

“We cannot discuss matters pertaining to capability gaps of the Philippine Army as these are classified information involving national security,” Iriberri said.

He was also charged with graft before the Ombudsman for shelving of three ammunition purchase projects. The complaint was filed by a military contractor. IDL