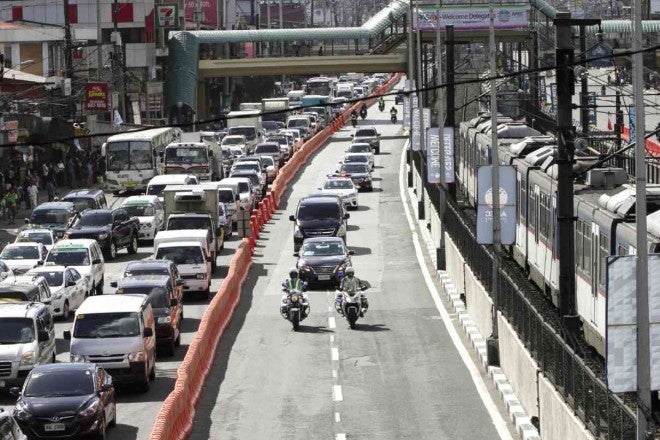 A traffic measure implemented when the capital recently hosted the Asia-Pacific Economic Cooperation (Apec) summit will again be used on Edsa this holiday season.

In a briefing on Friday, Cabinet Secretary Jose Rene Almendras said plastic barriers would soon be installed on a stretch of Edsa to designate two lanes for public utility buses and three lanes for private vehicles.

These separators, he said, are intended to “improve (traffic) flow for buses more than cars.”

“We want to encourage the high-occupancy vehicles to move faster. So that’s why we are going to do it… and hopefully encourage people to take the bus,” Almendras said.

The measure would initially target the stretch from Shaw Boulevard in Mandaluyong City to Guadalupe in Makati City, he added.

“We have addressed most of the concerns on Edsa. All lanes going northbound, except for Cubao, (are) relatively good,” he said. “So our problem really now is the ‘great Guadalupe challenge,’ as I call it… We think this is going to be complicated this Christmas because many will want to go shopping. That’s why we’re going to put up the barriers.”

Authorities set up the so-called “Apec Lanes” on Edsa by also putting up lane barriers for VIPs when the country hosted the international conference last week.

Also on Friday, major shopping malls agreed to adjust their store hours starting next month to help minimize traffic congestion during the holiday season, especially on Edsa, according to the Metropolitan Manila Development Authority (MMDA).

In the same briefing with Almendras, MMDA Chair Emerson Carlos announced another adjustment on Edsa.

Vehicles on both directions of the highway will be allowed to make a left turn to Quezon Avenue and Aurora Boulevard, he said.

Barriers will also be put up in the Edsa-Connecticut area to discourage “swerving” on the approach to the flyover going to Pasig City, Carlos added.

Read Next
An eternity for innocent housemaid
EDITORS' PICK
‘NCR Plus’ to be under MECQ starting April 12 until April 30 — Palace
Pru Life UK receives four golden arrows for solid corporate governance
Pre-order the new vivo Y20s [G] to get a free TWS earphone
Malls adjust ‘NCR Plus’ operating hours for April 12-30 MECQ
Speed up your game with the new vivo Y20s [G]
Metro Manila to have shortened curfew hours from 8 p.m. to 5 a.m. under MECQ
MOST READ
Stop ‘creeping occupation’ of ‘militia’ boats in WPS, Pacquiao asks China
Bea Alonzo clarifies status of her relationship with Dominic Roque
Convicted former aide of Sen. Bong Revilla dies — BuCor
Locsin to China: ‘Then move out’
Don't miss out on the latest news and information.