Guard shoots coworkers who accused him of theft 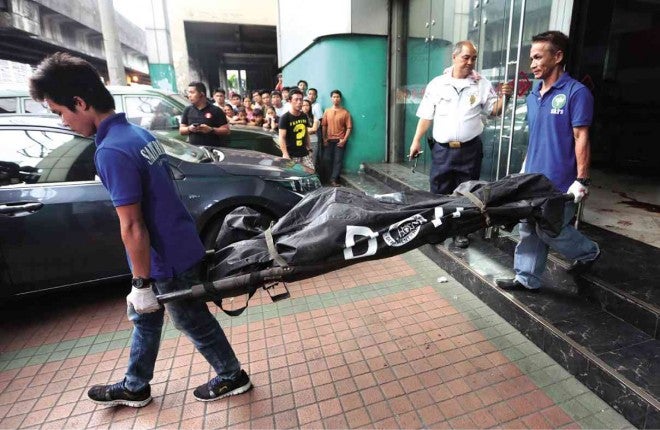 MANILA MAYHEM The body of security guard Fernando Cano is taken out of the building in Sta. Cruz, Manila, where he shot three coworkers, killing one of them, before turning the gun on himself on Thursday. Grig C. Montegrande

Fed up with his coworkers’ accusations, a security guard went on a shooting rampage Thursday inside their office in Sta. Cruz, Manila, leaving one dead and two others wounded before turning the gun on himself.

The night before, Fernando Cano had a few drinks with his brother-in-law Ronel Monares and told his only child, a four-year-old son, to “take care of your mother for me.”

Then for some reason Cano started singing: “In heaven there is no beer…”

Chief Insp. John Guiagui, the onsite negotiator, said that Cano—a guard who had been working for 17 years at Chain Glass Enterprise on Rizal Avenue near Pampanga Street—specifically targeted the three people who had accused him of being behind the disappearance last month of P1 million in cash from the office.

Around noon on Thursday, investigators from the Manila Police District (MPD) went to the company to give the owner a copy of their initial report on the theft. According to Chief Insp. Alexander Rodrigo of the MPD theft and robbery unit, all employees were considered suspects since they have yet to pinpoint the perpetrator.

Manager first to be shot

At 12:30 p.m., shortly after the police left, Cano shot marketing manager Ricardo Mezina in the head as the latter was smoking a cigarette outside the office.

The suspect then walked toward Mark Salas and shot him before going after a third coworker who hid inside the toilet, said Supt. Jackson Tuliao, MPD Station 3 chief.

But another coworker, Melanie Alejandro, ended up being hit in the shoulder by a stray bullet. All of the victims were rushed to the Chinese General Hospital, where Mezina was pronounced dead.

Witnesses said that every time Cano fired his gun, he would scream: “I’m innocent!”

He uttered it for the last time before shooting himself under the chin with his service firearm, a .38-cal. revolver. The police later recovered a total of six bullet casings from the two-story building.

As Cano went on a shooting rampage, his panicked coworkers hid under their desks while others escaped by climbing down a ladder from a window on the second floor.  The owner’s children, meanwhile, locked themselves in their office.

Outside the building, onlookers gathered on Rizal Avenue from 12:30 p.m. until the incident was declared over two hours later, as if watching an action film.

Members of the Special Weapons and Tactics unit surrounded the building while the nearby streets of Pampanga and Laguna were closed to traffic until policemen discovered Cano’s body.

Initially, policemen were unaware that Cano was already dead. They tried to negotiate with him and even brought his wife Melanie and brother-in-law Monares to speak with him.

Chief Supt. Rolando Nana, MPD director, said they decided to enter the building after failing to get a response from Cano for two hours.

But first, they had to get four more people out the building, two of them the owner’s children. At 2:20 p.m., the police finally went in and found Cano’s bloodied body.

“He served the company for 17 years that’s why he couldn’t accept the fact that he was being blamed and repeatedly teased by his coworkers for a crime he did not commit,” Monares said.