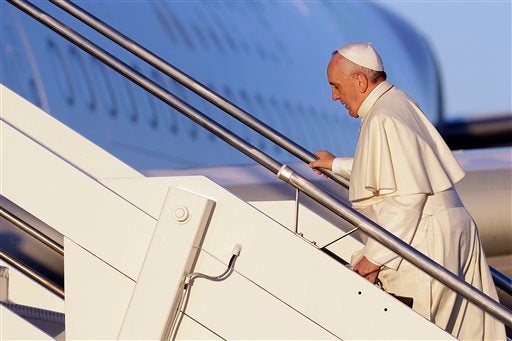 Pope Francis boards his airplane on the occasion of his trip to Africa, at Rome’s Fiumicino International Airport, Wednesday, Nov. 25, 2015. Pope Francis is leaving for a trip that will take him to Kenya, Uganda and the Central African Republic, from Nov. 25-30. (AP Photo/Gregorio Borgia)

NAIROBI, Kenya — Pope Francis wants to bring a message of peace and reconciliation to an Africa torn by extremist violence, but security concerns are so high that he might be forced to make changes to his itinerary for the final leg of the trip.

On the eve of the departure, the Vatican spokesman, the Rev. Federico Lombardi, insisted that there were no new worrisome threats and that the pope planned to carry on with his program, as scheduled. But in a sign that the Vatican was on alert, Francis’ own chief bodyguard made a last-minute visit to Bangui this week to get the latest on-the-ground security updates, and will only meet up with the pope once he lands in Nairobi on Wednesday afternoon.

The bodyguard, Domenico Giani, said upon his departure that “some small modifications” could be made to the itinerary if risks emerged, especially for the civilian population or the U.N. peacekeeping operation.

Before he gets to conflict-wracked Central African Republic, Francis is expected to press a host of issues close to his heart in Kenya and Uganda, including poverty, the environment and the need for interfaith dialogue.

He is also likely to challenge the countries’ political leaders on corruption. Transparency International ranked Kenya a lowly 145 out of 174 countries in its 2014 corruption perception index, while critics of Ugandan President Yoweri Musevni charge that official corruption has thrived under his three-decade rule.

Francis is likely to raise the issue during his first meeting Wednesday with Kenyan President Uhuru Kenyatta, who declared this week that corruption is a national security threat to East Africa’s largest economy.

While in Kenya, Francis will also deliver an important environmental message at the U.N. Environment Program headquarters on the eve of make-or-break climate talks in Paris. He’ll also visit a Nairobi slum and seek to encourage young Kenyan Christians following the rampage by Islamic extremists who killed nearly 150 people at a college of mostly Christian students in April.

In Uganda, Francis will pray at the shrine to the country’s famous martyrs and celebrate a Mass in their honor.

The 45 Anglicans and Catholics were killed during the persecution of Christians in the region from 1885-1887. Pope Paul VI canonized the 22 African Catholics in 1964, and they remain an important reference point for Ugandan Catholics such that some 2 million people are expected at Francis’ Mass on Saturday.

Some uncomfortable issues may arise: The church’s opposition to condoms as a way to fight AIDS, and its support of local legislation criminalizing homosexuality are chief among them.

But on the whole, the pope’s visit is meant to tell the African church that it matters, said the Rev. Robert Dowd, professor of political science at the University of Notre Dame. “It has a crucial role to play in promoting justice and peace in societies where governments are not always accountable or responsive.”

The Vatican has long looked to Africa as the future of the Catholic Church, given the proportion of African Catholics in the world population of Catholics increased from 7 percent to 16 percent between 1980 and 2012, according to a report this year by the Center for Applied Research in the Apostolate, a research center affiliated with Georgetown University in the United States.

Francis, though, is also likely to issue some tough love words to local clergy, who tend to let missionaries get their hands dirty working with society’s outcasts while diocesan priests and bishops live somewhat removed from the hardships of daily life. The Vatican has also long fought to keep its African clergy celibate.

The pope is due to arrive Sunday in Bangui for the most delicate part of the trip. The country has been highly volatile since early 2013, when Muslim rebels overthrew the president of a decade. Unprecedented sectarian violence followed and has continued to flare despite the presence of more than 11,000 peacekeepers and police.

Francis is expected to encourage an interfaith peace initiative involving the archbishop, the evangelical leader and Bangui’s imam, while also giving Africa a head start to his Jubilee Year celebrations: On Sunday, he is due to open the “holy door” of Bangui’s cathedral, formally inaugurating the yearlong celebration of mercy that he has proclaimed for the church around the world.

In a video message sent to CAR Catholics this week, Francis made clear he had no plans to skip the appointment.

“Your country has known for too long a situation of violence and insecurity where many of you have become innocent victims,” he said. “My aim is to bring you comfort, consolation and hope in the name of Jesus.”