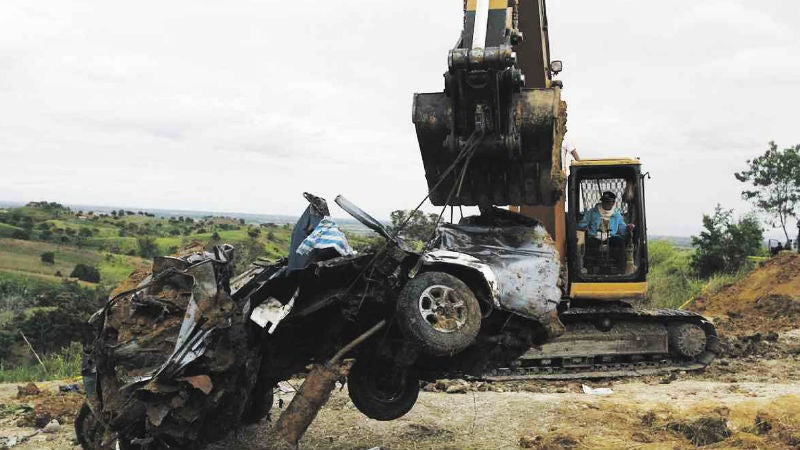 LAST TRIP A Tamaraw FX vehicle with license Plate No. UTG 234 is recovered from a shallow grave where the bodies of at least 50 of 58 victims of the Nov. 23, 2009, Maguindanao massacre have been found in Datu Ampatuan town, Maguindanao province. REM ZAMORA

AMPATUAN, Maguindanao—Sukarno “Uka” Badal has frequent nightmares and has to wake up to the reality that his bad dreams happened six years ago.

Badal witnessed the grisly killing of 58 people, mostly media workers, in what is now known as the Maguindanao massacre.

“I saw what happened,” he told the Inquirer in an interview at the massacre site.

Badal, then the vice mayor of Sultan sa Barongis town, was considered the “right-hand man” of Andal Ampatuan Jr., the principal accused in the carnage.

“The original plan was to kill Mangudadatu,” he said, referring to then Buluan Vice Mayor Esmael Mangudadatu, who was planning to challenge the Ampatuans’ hold on power in Maguindanao.

Badal said the plan to kill Mangudadatu was hatched as early as July 2009 when talk circulated that he was running for provincial governor in the 2010 elections.

This information reached Mangudadatu. So when it was time to file his certificate of candidacy (COC) for governor, he sent his wife Genalyn, his sister Eden and several relatives and supporters to the Commission on Elections office in Shariff Aguak town.

Mangudadatu said he thought the Ampatuans would not hurt his wife and sister because they were women.

But the convoy of six vehicles did not reach Shariff Aguak as it was held in Ampatuan town. Two other vehicles, which happened to be traveling on the highway in Ampatuan but were not part of the Mangudadatu convoy, were among those blocked the party.

Badal said Andal Jr. and his group of some 300 armed men hid meters away from the highway in the village of Saniag and waited for the convoy to pass by.

“When the convoy passed by, Unsay (Andal Jr.) ordered his men to block the road so no other vehicle could enter,” Badal said.

“Then we moved out to follow the convoy,” he added.

A kilometer away from Barangay Siniag was another roadblock set up by armed men allegedly led by Chief Insp. Sukarno Dicay, who was then the deputy police chief of Maguindanao, Badal said.

“When we (Andal and hundreds of his armed followers) arrived in Barangay Malating, the people were already outside the vehicles. They were lined up and were lying face down by the roadside,” Badal said.

It was at this time that Genalyn (also known as Bai Gigi) and Eden rose to confront Andal.

“Out of anger, Bai Gigi tried to stab Unsay (Andal Jr.) with a pen,” Badal said, adding that one of Andal’s bodyguards was fast enough to hold Genalyn’s hand.

“Then Unsay dragged Bai Gigi to his vehicle. He also ordered the people to board their vehicles,” he said.

From the highway, Andal’s vehicle led the convoy to an uphill ride to the interior sitio of Masalay in Barangay Salman.

The 15-minute ride on a rough road stopped on a hill.

“When we arrived in the area, Unsay ordered his men to bring Bai Gigi and Bai Eden before him,” Badal said.

“And without warning, he shot them,” he added.

After killing the two Mangudadatu women, Andal Jr. ordered his men to take the other victims out of their vehicles and bring them before him.

Then the killing spree started.

“None among his men fired first at the victims, who were brought before him in batches. Unsay would do it first, then his men would follow,” Badal said.

“He also used different firearms. He would tell his men to give him another caliber, which he used to kill the victims,” he said.

One by one, the victims dropped dead where they stood. “But there were several victims who were thrown off meters away because of the impact of the bullets that hit them,” Badal said.

Some of those who fell to the ground were still moving.

“The ‘finishers’ shot them to make sure that they were dead,” he said.

But there were those who resisted being brought before their executioners.

“So they were shot while being dragged away from the vehicles,” Badal said.

There were also those who refused to get out of the vehicles.

“So Unsay ordered his men to fire at the two vehicles,” Badal said.

The killings happened while the victims were praying.

“All of them, Christians and Muslims, were praying,” Badal said.

Although armed with a .45 cal. automatic, Badal said he did not fire a single shot.

“I held Unsay’s back to prevent him from going off balance, due to the impact, as he fired at the victims,” he said.

Badal said he wanted to tell Andal to stop but changed his mind when Andal shot one of his bodyguards who told him to stop the killing.

“I decided to just shut up when I saw him shot his bodyguard in the shoulder after the man asked him to stop,” he said.

The killings lasted about 30 minutes. “By then, Andal’s white Lacoste shirt was already splattered with blood,” Badal said.

“And then I got a phone call informing us that government soldiers were on their way here,” he said.

“That’s when I asked Unsay if he was going to fight the soldiers. He said ‘no.’ So I told him we had to leave,” Badal said.

As Andal and his men were leaving, a backhoe was on its way to the massacre site.

“The backhoe was at least 100 meters away from the massacre site when we left the area. I do not know what happened after that,” Badal said.

When the soldiers arrived, they saw bodies all over, freshly covered graves and half-buried vehicles.

While the digging for bodies continued, Andal and his men hid in Hofer town.

A week later, Andal, his father Andal Sr. and brother Zaldy (then governor of the Autonomous Region in Muslim Mindanao), were taken into government custody.

Badal went into hiding. “I was scared. I did not know what to do,” he said.

Almost a year later, Badal surrendered to authorities after sending feelers that he wanted to be a state witness.

In February 2013, the charges against Badal were dropped. He became the star witness for the prosecution.

There were instances inside the court when the Andal Jr. and Zaldy brothers would give him the “hand-in-the-neck” gesture.

“Using their handcuffed hands, they would tell me they were going to kill me,” Badal said.

“But how can they do that when they can’t even use their hands because they were handcuffed?” he asked.

Badal is no longer scared. “I did what I did because I wanted justice for the victims,” he said.

But he is still having nightmares.

“I had one hours ago,” he told the Inquirer during the interview on Thursday.

“I hope the nightmares stop when justice is finally served for the victims,” he added.