A brunch to benefit a school 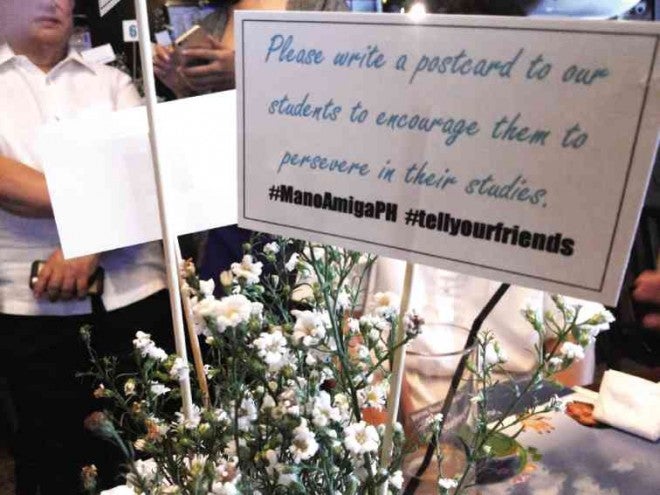 With the place smelling like waffles, coffee and eggs, it was definitely a brunch and something to #tellyourfriends about.

The Bowery in Taguig City was packed with people eager and willing to help Mano Amiga, a school for children from low-income families, get established in its new and permanent location. Every guest, who paid P1,500 each for the brunch, would be donating an armchair to the school.

The Mano Amiga school, put up in 2008, is temporarily located on a lot owned by Habitat for Humanity at the Food Terminal Inc. (FTI) complex. Classes have to be conducted in shifts because volunteers and teachers only have three classrooms to use.

“Due to lack of space, we end up turning down four out of five applicants,” explains Eleanor “Lyn” Pinugu, cofounder and executive director of the school. The school, she says, has a class size of 30-40 students. It will also offer the K-12 (Kindergarten to Grade 12) curriculum next school year. It has to find a bigger place to accept more students.

Pinugu says they will be forced to close down if they are unable to move to the new campus.

“I saw that the personal attention given to the students by the teachers made a big difference in their formation,” says Pinugu. The teachers usually also make home visits.

The permanent school will be located in BF Homes in Parañaque City, just 10 minutes away from FTI. The first phase of construction will cost P37 million. As of October, it was still P7 million short.

The fund-raising for the construction of the new building started in January. The new school will be able to accommodate 1,200 students, according to Pinugu.

Mano Amiga, loosely translated as friendly hand, aims to give international quality education to less-privileged children at a minimal cost. The program was started in South America in 1963 through the efforts of missionaries and volunteers.

The first school was founded in Mexico City. Today, there are 37 schools in Mexico, Argentina, Brazil, Colombia, El Salvador, Guatemala and Venezuela.

Mano Amiga came to the Philippines in 2008. Pinugu, then 23, was one of those who spearheaded the establishment of the school.

“It started as a joke,” says Pinugu, who became a volunteer in Mexico when she was just 21. She visited schools to encourage the youth to become volunteers.

“I, along with some high school students, would dress up as clowns (a la Patch Adams) and visit the public hospital to try to make kids who are terminally ill laugh and temporarily forget that they are sick,” Pinugu says.

She came across Mano Amiga Guanajuato in Mexico and was surprised that the school was for underprivileged students. “Every child was dressed well, brimming with self-confidence and spoke with eagerness about the future.”

Before leaving, she jokingly told the principal to give her a call if they decided to open a school in the Philippines.

Months after her visit to the Mano Amiga Guanajuato school, the principal called and asked if she wanted to open a Mano Amiga school in the Philippines.

At 23, she was given a challenge very few persons her age usually get. She had the responsibility and also the opportunity to put up a school that would give quality education to underprivileged students.

Pinugu, who completed her studies on a college scholarship, wanted other children to have the same opportunities she had.

“I recognized the fact that I had all the opportunities because somebody decided to invest in my potential,” she says.

Not letting her inexperience become a hindrance, she researched on the problems of schools and studied the common problems of students.

Although she got more “Nos” than “Yeses” when she presented her plan to companies, she was grateful that she was able to find people who shared her vision.

Despite all the problems, Pinugu is inspired by the stories of Mano Amiga students.

Once they brought some students to the Philippine General Hospital to expose them to the idea of volunteerism, as a way of giving back to society, one of the values the school wishes to impart to students. 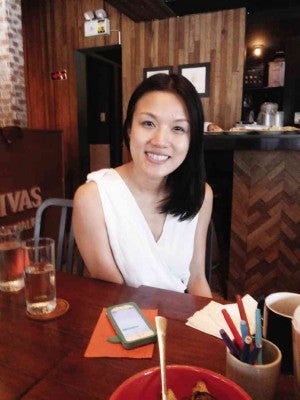 EXECUTIVE director Lyn Pinugu, who went to college on a scholarship, pays it forward.

When they were about to leave, a student asked Pinugu if she could donate her allowance to the hospital ward. Asked how she would get home without any money, she said, “Mas kailangan nila. (They need it more.)” This is why, Pinugu says, this job is worth keeping.

Volunteerism has always been Pinugu’s passion. Her family conducts an annual outreach in the provinces during Holy Week and Christmas. She had turned her back on high-paying jobs for her advocacy.

“My parents taught me and my sister at a young age to be generous (and share) whatever we have. As I grew older, I began volunteering my time for several projects—orphanages for children with special needs, public hospitals and organizations that help promote the rights of indigenous people,” Pinugu says.

Her efforts did not go unnoticed. She was a TOWNS (The Outstanding Women in the Nation’s Service) awardee for social enterprise and education in 2013. In 2012, she received recognition in Davos, Switzerland, from the World Economic Forum as a Global Shaper.

Mano Amiga used to rely solely on donations. But after Tropical Storm “Ondoy” in 2009, the needs of those affected by the storm were given priority, says Pinugu. “It was a very difficult period for us. I went to bed at night worrying where I would get the money to pay for the salaries of the teachers.”

She and five other people put up Bistro 3846, a cafeteria that serves meals to children of Everest Academy and Keys International School. The profit goes to the Mano Amiga scholarship fund.

Aside from helping the students, Mano Amiga also helps their parents by providing them with employment.

“You can help the moment you choose to,” Pinugu says. For the brunch, Pinugu says they expected to receive donations for only 100 chairs. They ended up having money for 300.

One of their ambassadors, actor and restaurateur Marvin Agustin, donated his prize of P162,000 from ABS-CBN’s game show “Kapamilya Deal or No Deal.”

Even kids from Everest Academy donated the contents of their piggy banks to Mano Amiga.

“The school is just a model,” says Fr. Luis Garza, LC, executive director of Everest Academy, when asked if there are plans to open similar institutions in the provinces.

Mano Amiga aims to open in 15 locations by 2025, according to its website.