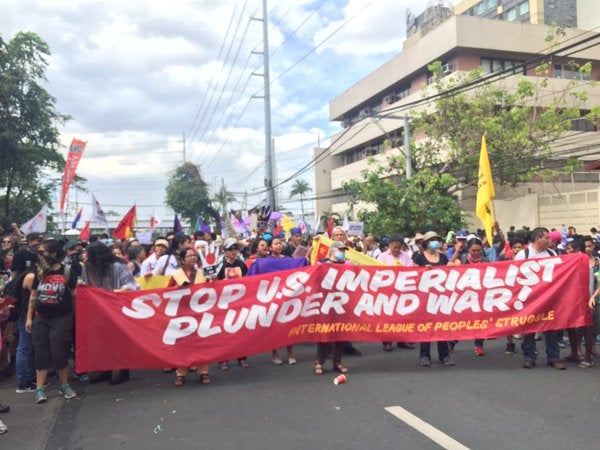 Before peacefully dispersing from the intersection of Buendia Avenue and Roxas Boulevard, militant groups protesting against the ongoing Asia-Pacific Economic Cooperation (Apec) summit burned an effigy of a vulture.

The effigy, they said, was symbolic of the supposedly predatory character of the international economic forum, which “picks the flesh off the developing countries.”

Anakbayan national chair Vencer Crisostomo said the Apec did not support small and medium local enterprises as its liberalization policies allowed richer countries to “dump their products” to the Philippines, which he said had led to the bankruptcy and closure of small business and “soaring” unemployment rates.

“Don’t be fooled by flowery slogans of inclusive growth and building a better world. Apec’s development model has only resulted in worsening poverty and inequality for poor countries like the Philippines,” Crisostomo said.

Citing the K to 12 law, Kabataan party-list nominee Romina Astudillo said Apec promoted the commercialization of education which she said would lead to the production of “semi-skilled” and “docile” workers.

“Kabataan is against Apec because it will bring another neo-liberal offensive education. One agenda of the Apec 2015 summit is investing on human capital, which in turn, its effect on the youth will be worsening labor crisis, mainly the K to 12 program. Magpo-produce ito ng maraming semi-skilled, cheap-labor and docile workers among the youth, which means dadami yung mawawalan ng access sa tertiary education,” Astudillo told INQUIRER.net.

Anakbayan and Kabataan are just two of the many militant groups that converged in Manila on Wednesday in an attempt to penetrate Roxas Boulevard, where Apec meetings are being held. Police forces, however, blocked them with the use of shields, wooden sticks, and water cannons.

While most protesters criticized the police as “tuta ng dayuhan” for preventing them from marching, Astudillo said she somehow understood that they were just obliged to do their jobs.

But she noted that the right to peaceful assembly was part of their battle cry.

The protesters were peacefully dispersed by police at around 2 p.m. RC