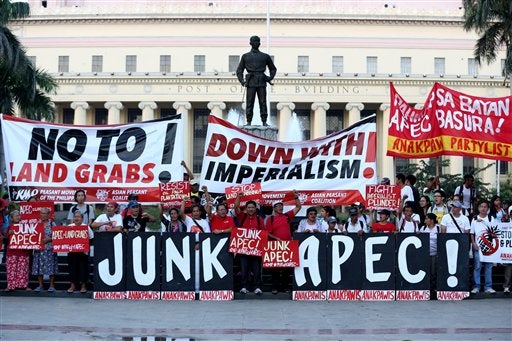 They came from various sectors and marched from different directions. They also demonstrated creative ways of registering protest using costumes, banners and torches. But the groups were united by a single rallying cry: Junk Apec!

Activists protesting the Asia-Pacific Economic Cooperation (Apec) summit kept police on their toes on Wednesday as they mounted several rallies all over Metro Manila, that tested security measures and traffic regulations put in place by the Apec organizing committee.

Marching on Morayta in Manila toward Mendiola were various indigenous peoples’ (IP) groups that described Apec as the “scourge” of the IPs, as it encouraged mining in their ancestral lands. The groups lit torches and held their banners high before leaving Mendiola peacefully.

At Raja Sulayman Park in Ermita, priests and other religious leaders braved the rains as they gave the acronym Apec a different meaning. The demonstration lasted about 15 minutes before the cassock-clad activists left the area.

The scene at Lawton Avenue near the Post Office was more volatile as militant groups from España Boulevard demanded that they be allowed to stay on Liwasang Bonifacio until today, Nov. 19.

The activists, most of them clad in red shirts, arrived near  Metropolitan Theater about

9 a.m., and tried to rush toward Liwasang Bonifacio, which had been closed for security reasons. Policemen in body armor immediately positioned themselves to block the group, a confrontation that eventually led to a skirmish, with militants hitting police with the poles holding their banners.

The rains, however, kept the militants at bay until 5 p.m., when they again tried to reclaim Liwasang Bonifacio, sparking another clash with the police. More cops were eventually deployed to the site, with the chief of Manila Police District himself overseeing the rally.

Police also blocked a contingent of some 40 farmers from Aurora province who had walked more than 100 kilometers to reach the Angeles City protest against Apec.

“The soldiers and policemen hopped into the bus looking for criminals. They checked our bags before they let us go,” Donato told the Inquirer by telephone.

Moments later, a bus tire burst, pierced by nails fixed on a wood plank. When the tire was replaced and the bus was back on the road in Rizal town, Nueva Ecija, a man on a motorcycle threw a hard object at the windshield, breaking it. Near the town proper, a policeman stopped the driver for driving with a shattered windshield.

“We decided to walk to Natividad town because no driver wanted to take us. [The drivers] were warned by police that their licenses would be confiscated if they allowed us to board their jeeps,” Donato said.

Later, after reaching Barangay Mabini Extension in Cabanatuan City, police at a checkpoint near Doctors’ Hospital in Cabanatuan stopped the farmers again, asking them for a rally permit.

But in a statement, the activist group Migrante complained that jeeps carrying the protesters in Pampanga were blocked by police along MacArthur Highway, and the group was brought to the Balibago police station where they were questioned for 30 minutes before being released.

In Baguio City, about 200 students of the University of the Philippines walked out of their classes and marched on Session Road to protest the Apec summit.

Despite the rash of rallies and protests, including one by the People for the Ethical Treatment of Animals in Makati City,  that was also blocked by police, security officials remained unruffled, and said there were “no untoward incidents” on the first day of the Apec leaders’ meeting at the Philippine International Convention Center on Roxas Boulevard in Pasay City.

PNP Director General Ricardo Marquez himself expressed satisfaction at how the police were handling the protest rallies.

“They have been trained and have prepared for this. By the looks of it, they’re very confident they can perform what their commanders ask of them,” he added.

Marquez said the PNP would maintain a “maximum tolerance” policy toward protesters, adding that as yet, no one has been arrested for joining the anti-Apec rallies for the past few days.

Marquez, however, confirmed reports that the National Prosecution Service has sent prosecutors to the PNP headquarters in Camp Crame, to conduct inquest proceedings for those arrested “even if the courts are on holiday.”

By all indications, the protesters remain undeterred from their efforts, despite attempts to get near Apec venues were blocked by security officials.

Organizers of the #PHFightAPEC People’s March today  confirmed it would push through. The march of multisectoral leftist groups is expected to start at Liwasang Bonifacio in Manila at 10 a.m., and will try “to get as close as possible” to the Philippine International Convention Center.

In an earlier statement, the spokesperson of the People’s Campaign Against Apec and Imperialist Globalization, former Bayan Muna Rep. Teddy Casiño, explained their protests aimed “to show the world that Apec’s agenda for even more free trade globalization is hurting the people and the planet.” With a  report from Tonette Orejas, Inquirer Central Luzon