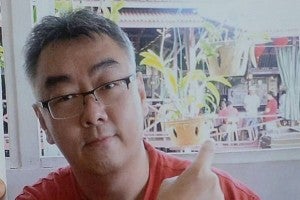 Bernard Then Ted Fen. PHOTO from Malaysia’s The Star Online

ZAMBOANGA CITY, Philippines – (UPDATE) The Abu Sayyaf beheaded yet another victim, this time, a Malaysian the bandits had snatched from  Sandakan in May.

Military sources said the severed head of Bernard Then Ted Fen, who was killed through decapitation the Abu Sayyaf carried out in Barangay Taran in Indanan, Sulu, around 4 p.m. Tuesday, had been recovered.

The victim’s body remained missing as of Wednesday morning, a military source who declined to be identified said.

Then’s body was said to be buried in the same place after the beheading, which was reportedly carried out by the group led by Abu Sayyaf sub leaders Alden Bagade and Idang Susukan, the sources said.

Then was reportedly killed after his family failed to deliver the P30-million ransom money the bandit group had demanded for his release.

Chief Insp. Junpikar Sittin, chief of police of Jolo, said  Then’s head was discovered by a street-sweeper, who was cleaning the portion of Marina St. in the Walled City village in Jolo, on Tuesday evening.
Sittin said the street-sweeper’s attention was caught by a blood-stained sack dumped by the road side.

When he approached it, he saw that it also bore the marking “Bernard Ghen Ted Fen” – written using pentel pen.

Immediately the street-sweeper reported his find to the nearest police station, Sittin said.

He said the police got hold of Then’s head around 10:20 p.m. and turned it over to the military after documentation.

Col. Allan Arrojado, commander of the Task Group Sulu, said prior to the bandit group’s plan to kill the victim, the military conducted aerial bombardment, which targeted the Abu Sayyaf lair on Bud Taran.

“It appears that the beheading pushed through almost simultaneously with the bombardment,” he said.

The 39-year-old Then was kidnapped, along with Thien Nyuk Fun, a restaurant owner, from Sandakan in May this year.

Thien was earlier released but the bandit group refused to let go of Then unless his family paid ransom.

The Malaysian media reported in August that Then had told his wife, Chan Wai See, that the Abu Sayyaf had planned to kill him if the ransom money was not delivered by November. Then also told her that another hostage, Dapitan village chair Rodolfo Boligao, had been beheaded because of the family’s failure to pay ransom.

Then was the remaining Malaysian hostage that the Abu Sayyaf had held.

The bandit group had ventured into Malaysia in a bid to beef up its financial capability to sow terror.

Last year, the bandit group also snatched a police officer and killed another from a resort near Semporna.

The Abu Sayyaf, a ragtag band of self-styled Islamists, currently holds several other foreign kidnap victims, including two Canadians, a European and a Norwegian.

In Cotabato City, Gov. Mujiv Hataman of the Autonomous Region in Muslim Mindanao, said it was time for the government, especially the local government of Sulu, to act and end the atrocities being perpetrated by armed groups in that province.

“The local government should act on this. It should be on the front line in the campaign against these armed groups,” he told the Philippine Daily Inquirer in an interview.

Hataman said although the military has been in pursuit operations against the Abu Sayyaf, “the local government should also (make) concerted effort to address the problem.”
“It is not enough that we condemn this atrocity, we should act on it,” he added.

(With an additional report from Nico Alconaba, Inquirer Mindanao).  SFM