Longest road trip of my life: 8 hours to work 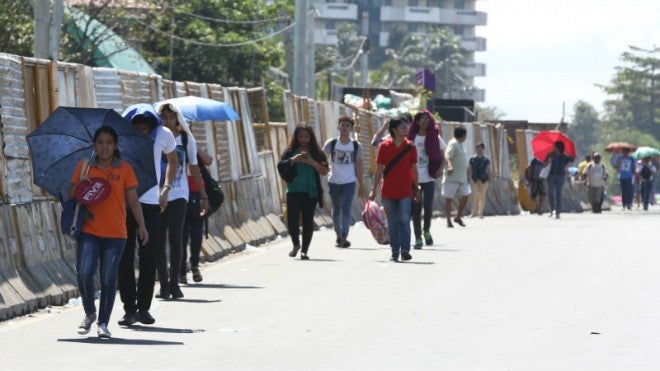 LONG WALK Thousands of commuters from Cavite province are forced to walk from Coastal Road to get to their place of work and other destinations. Since Monday, authorities have barred most vehicles from entering Roxas Boulevard, a short distance from the Philippine International Convention Center, venue of the Asia-Pacific Economic Cooperation Leaders’ Meeting. NIÑO JESUS ORBETA

IT WAS a usual manic Monday. I had no idea that the longest road trip of my life was about to begin.

Two years ago, I took a plane ride to Ilocos province in lieu of the eight-hour land trip to Laoag City because I hate long rides. On Monday, I found myself caught in a situation I had managed to evade in 2013—in a hellhole that is Metro Manila.

It usually takes a three-hour bus ride from my hometown in Indang, Cavite province, to my workplace in the Inquirer on Chino Roces Avenue in Makati City. But Monday proved to be an exception. It took me eight hours on the road—riding four jeepneys, three pedicabs, a train, bus and taxi—and thrice my usual one-way fare to get to work.

I was waiting around 1 p.m. for an Ayala Avenue-bound bus in front of Robinsons Pala-Pala on Aguinaldo Highway in Dasmariñas, Cavite, when I learned that Cavite buses were barred from entering Coastal Road until Friday due to the ongoing Asia-Pacific Economic Cooperation (Apec) meetings.

According to the bus driver, the farthest drop-off point was at Longos in Bacoor town, the only recourse for passengers taking public rides. But when I got to Longos, there were no jeepneys nor buses plying the Baclaran route. Other stranded passengers were taking the pedicab to Zapote Road, and I wound up sharing one with another passenger.

“It’s P20 each, just past the bridge,” the pedicab driver said in Filipino.

It was a swift seven-minute ride to Zapote and I was looking forward to catching a bus from Alabang going to Buendia. But no bus was in sight; only crowded jeepneys with a “Kabihasnan” signboard, indicating a Parañaque City destination. I saw a few jeepneys headed straight to Baclaran but they were full as well. If I took a jeepney bound for Kabihasnan, I thought, I could then take a ride toward Baclaran.

I grabbed a bite at Jollibee-Zapote, used the restroom and bought bottled water to prepare myself for what looked like a long, exhausting trip ahead.

I was contemplating my travel game plan when I noticed a stranded mother nursing her 3-month-old infant. She said she was also from Cavite.

“I will just go back home. I already texted my husband,” she said in Filipino.

The man on my right was on his cell phone, most likely talking to a coworker.

“Please tell Ma’am Nanette that I can’t make it. Sorry, but I’ve waited (for a ride) long enough,” he said, sounding defeated.

But going back home to Indang was never an option for me. I had traveled this far so moving forward was the only way to go. Plus it’s Apec week and there’s much work to be done at the office. If this were a battle, I wasn’t giving up without a damn good fight.

I walked a few blocks toward Zapote Road Skyway where I finally found a Parañaque-bound jeepney.

Throughout my Kabihasnan ride, I was texting my younger sister Michelle, who lives with her husband in Las Piñas City, for directions. Her last reply to me warned against cell-phone thieves teeming in the area. But I was using my cheap but trusty dual SIM Nokia phone, my iPhone safely tucked inside my other bag.

At the drop-off point in Kabihasnan, all Baclaran-bound jeepneys turned out to be full. It was already 3 p.m. and the heat was killing me.

I had to wrestle my way inside a jeepney bound for Baclaran. I overheard a burly man advising a student to take the LRT or MRT upon reaching Baclaran. I thought it was a good idea. By taking the LRT 1 to Gil Puyat station, I could ride a jeepney to Chino Roces Avenue.

But the roads were choked and the jeepney was moving at a snail’s pace. Fellow passengers had started getting off, opting to walk instead toward the train station. The waiting was too much to bear.

I joined the crowd and walked on Quirino Street until my feet hurt. Enterprising men were offering motorbike and pedicab rides at P50 a head. I haggled and rode a pedicab to the Baclaran LRT 1 station for P30.

“Yes, ma’am. I was supposed to ply Roxas Boulevard, but it’s closed,” he said.

It was past 5 p.m. when I reached the LRT 1 station in Baclaran. I paid P16 for a single trip to the Gil Puyat station which was also teeming with passengers. I was hoping to get on a PRC-bound jeepney which goes past our office, but the drivers weren’t plying that route. “Buendia is closed,” they said. I stood on Buendia Avenue along with other stranded passengers, waiting for an Ayala-bound bus, a jeepney or a cab.

I waited some 30 minutes before going inside a fast-food outlet to use my smartphone and call a GrabTaxi cab. But no Grab driver showed up even after an hour of waiting.

My stomach was grumbling, my legs were aching, I was tired and couldn’t take another step. Then I had a bright idea.

I hailed a pedicab and asked the driver to take me to the Cash & Carry Mall on Filmore Street near Osmeña Highway. I paid him P40, which left me with only P100 in my wallet. I joined the queue at the taxi lane, my last resort.

The long queue at the taxi lane was expected, but I lined up anyway while trying the GrabTaxi app once more. I waited for an hour, while my phone battery run dangerously low. Just as my turn came at the taxi lane, a GrabTaxi driver on Osmeña Highway picked up my request.

I heaved a sigh of relief. After eight agonizing hours and poorer by P296, in what was probably the longest day of my life, I made it to the office at 7:51 p.m. What a helluva ride!