Parañaque execs got text on Manila-Cavitex closure only on Tuesday 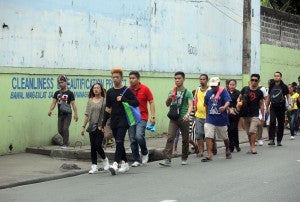 APEC / NOVEMBER 16, 2015
Due to the security measures taken for  the APEC 2015 summit, commuters from Cavite were left walking to Baclaran, Paranaque City to find passenger vehicles on Monday, November 16, 2015, after authorities closed down a portion of EDSA.
INQUIRER PHOTO / NINO JESUS ORBETA

MANILA, Philippines — Parañaque City officials were informed “too late” of the closure of a part of the Manila-Cavite Expressway as part of the preparations for the Asia Pacific Economic Cooperation in the country.

Senior Supt. Ariel Andrade, the city’s chief of police, said over the phone that he was officially informed about the closure of a part of the road near Coastal Mall “only” on Tuesday morning.

“What happened yesterday (the closure of that part of Cavitex on Monday), I didn’t know about that. Even I was caught off guard. I only got a text message this morning, around 7:30 a.m. (Tuesday), saying that that part of the road would be closed. It was too late,” Andrade said.

He was quick to add the detail was not crucial to police deployment in the area, adding that traffic management also in the area was under the supervision of the task force.

“Nonetheless I sent the text to the city hall for information dissemination within seconds upon receipt,” Andrade said.

For some residents in the south, advance information about the closure of that part of Cavitex would have helped them in deciding how to move about Metro Manila.

Susana Ompad, a resident of Las Piñas who was supposed to meet someone in Quezon City on Monday but ended up cancelling her plans at the last minute because she had no ride to the nearest Metro Rail Transit station from Coastal Mall, said she would have taken another route or cancelled her meeting altogether had she known about the closure in advance.

“Based on what I saw on television, only Roxas Boulevard would be closed starting Monday I think. Had I known…,” Ompad said.

A 29-year-old resident of Parañaque who refused to be identified agreed with Ompad.

He said he would have looked for a different route to Baclaran had he known about the closure beforehand.

“I was forced to walk from Coastal Mall to Baclaran on Monday. If I had known about the closure, I would have not used that route. But I was caught off-guard,” he said.  SFM