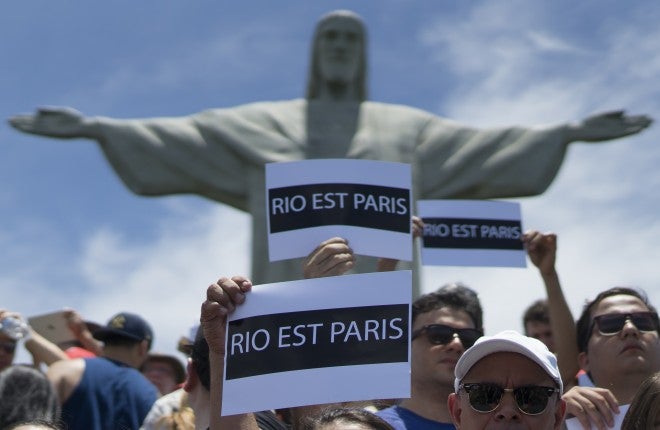 People hold up signs that read in French: “Rio is Paris” during a demonstration promoted by the NGO Rio de Paz, in solidarity with the victims of the attacks in Paris in front of Christ the Redeemer statue, in Rio de Janeiro, Brazil, Saturday, Nov. 14, 2015. French officials say several dozen people died Friday night when attackers launched gun attacks at Paris cafes, detonated suicide bombs near France’s national stadium and killed hostages inside a concert hall during a rock show. More than 200 people were injured, dozens critically. (AP Photo/Leo Correa)

PARIS — A French official says the suspected mastermind of the Paris attacks was also linked to thwarted train and church attacks.

A French official has identified the suspected mastermind as Belgian Abdelhamid Abaaoud, and says he is believed linked to thwarted attacks on a Paris-bound high-speed train and Paris area church.

The official, who has direct knowledge of the investigation, was not authorized to be publicly identified as speaking about the ongoing probe.

Seven people are in custody in Belgium suspected of links to the attacks and an international arrest warrant has been issued for a Belgian-born Frenchman believed involved in the attacks and who is still at large.