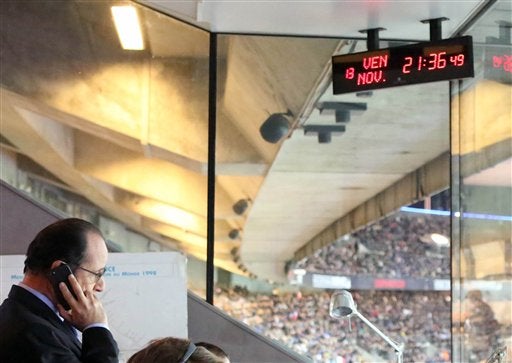 In this photo provided Friday, Nov. 13, 2015 by the French Presidential Palace, France’s President Francois Hollande is pictured in the security control room at the Stade de France stadium in Saint Denis, north of Paris, during the international friendly soccer match between France and Germany. French President Francois Hollande vowed to attack Islamic State without mercy as the jihadist group admitted responsibility Saturday for orchestrating the deadliest attacks inflicted on France since World War II. AP

PARIS — As France grappled with the aftermath of another terrorist attack, organizers of the European soccer championship faced renewed concerns about how to protect fans attending 51 matches in 10 stadiums around the country next year.

Friday night’s deadly bloodshed started when two explosions went off outside Stade de France during the national team’s match against Germany. The same stadium will host the tournament’s opening game on June 10 and the final one month later.

President Francois Hollande, who was attending the game and had to be evacuated from the stadium, called the attacks “an act of war.” Now, his government, security officials and organizers face a massive task to assure the hundreds of thousands of fans planning to come to France next summer that the country is safe. At the same time, they must find a way to let all those supporters into the country without letting potential terrorists cross the border as well.

“We will continue to do everything we can so that security is assured despite all the risks that this entails. I know that everyone is vigilant,” Le Graet said after Friday’s match. “Obviously this means that we will now be even more vigilant. But it’s a permanent concern for the Federation and the State.”

The European tournament is held every four years and is second in global prestige only to the World Cup. With 24 teams involved across 10 venues, the risks are enormous and the fans heavily exposed to danger, inside and outside stadiums.

Before Friday’s game, 80,000 spectators spilled off trains and walked in droves for several hundred meters to the stadium. Had the explosives gone off then, the casualty count could have been even much worse.

Inside the stadium, fans tried to stay calm as news unfolded of the bloody events. There was confusion, and fans were unsure whether to rush toward the exit gates or stay in their seats. Thousands walked onto the safety of the field.

“We felt safer inside the stadium but we were getting more and more terrifying news,” Arnaud Assoumani, the 2008 Paralympic long jump champion told L’Equipe’s TV channel. “There was an announcement at the end to say certain gates were open. I feared a crowd surge, which is what happened. Everyone was trying to get out of the doors at the same time. Some people were running and they were pushed up against walls and barriers. I don’t think there were injuries but it was a panic surge.”

In the months ahead, Le Graet will work closely with Jacques Lambert, chairman of Euro 2016 SAS: a joint venture between the French and European football federations responsible for all operational aspects of the tournament.

“From the start, we knew security would be a key component in the tournament’s success,” Lambert said in a recent newspaper interview. “The risk of a terrorist attack against France, I say more against France than against the tournament itself or against UEFA (European football’s governing body) was outlined from the start … What has really changed is the progression of the terrorist risk in comparison to the other risks.”

Lambert could not be reached for further comment on Saturday.

The French government has ultimate responsibility for overseeing security for Euro 2016, but an agreement was signed in September between the FFF and the Interior Ministry to split up duties.

Stadiums, training camps and team hotels are the responsibility of the tournament organizers, while the state is responsible for assuring security surrounding these locations. Then there are also fan zones, where fans without tickets to the games congregate in a central locations to watch matches on giant screens.

Private security firms are responsible for safety inside the stadiums, with police in charge outside — although law enforcement also have the authority to enter venues if needed.

Details about more precise security measures, pertaining to bag and body searches for example, will not be revealed until later.

The FFF holds regular security committee meetings with Euro 2016 organizers, with another scheduled for Monday.

Sports events have been targets of terrorist attacks before: the 1972 Olympic Games in Munich, when the Olympic Village was attacked; the African Cup of Nations in 2010 when Togo’s team bus came under gunfire in Cabinda; and more recently at the 2013 Boston marathon where two bombs exploded near the finish line.