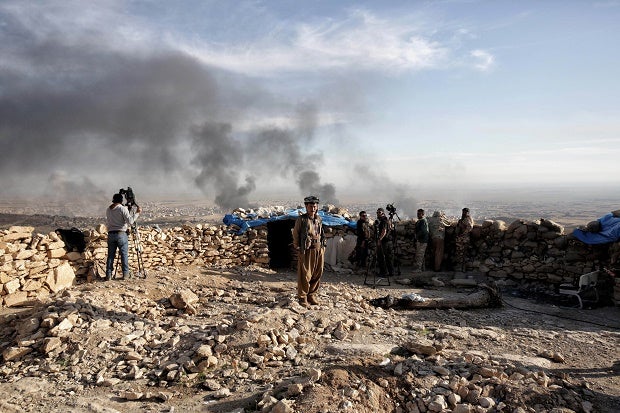 Smoke rises over Sinjar, northern Iraq from oil fires set by ISIS militants as Kurdish Iraqi fighters, backed by U.S.-led airstrikes, launch a major assault on Thursday, Nov. 12, 2015. The strategic town of Sinjar was overran last year by the ISIS group in an onslaught that caused the flight of tens of thousands of Yazidis and first prompted the United States to launch the air campaign against the militants. AP Photo

MOUNT SINJAR, Iraq—Iraqi Kurdish forces backed by US-led air strikes blocked a key Islamic State of Iraq and Syria (ISIS) group supply line with Syria Thursday as they fought to retake the town of Sinjar from the jihadists.

A permanent cut in the supply line would hamper ISIS’s ability to move fighters and supplies between northern Iraq and Syria, where the jihadists hold significant territory and have declared a “caliphate.”

Retaking Sinjar—where ISIS carried out a brutal campaign of killings, enslavement and rape against the Yazidi minority, members of which are now battling for the town—would also be an important symbolic victory.

In a rare admission, the Pentagon said US troops advising Kurdish troops on their offensive are close enough to the front to identify IS targets and call in air strikes.

Pentagon spokesman Peter Cook told reporters most of the US-led coalition troops are behind the front lines working with Kurdish commanders, but that “there are some advisers who are on Sinjar mountain, assisting in the selection of air strike targets.”

“They’re not directly in the line of action, but they might be able to visibly see it,” he added.

The autonomous Kurdish region’s security council (KRSC) also said that several villages near Sinjar were retaken and that the highway had been cut.

“The attack began at 7:00 a.m. (0400 GMT), and the peshmerga forces advanced on several axes to liberate the centre of the Sinjar district,” Major General Ezzeddine Saadun told AFP.

Up to 7,500 Kurdish fighters are to take part in the operation, which aims to cordon off Sinjar, seize ISIS supply routes “and establish a significant buffer zone to protect (it) and its inhabitants from incoming artillery,” the KRSC said.

The coalition carried out 24 strikes against ISIS in the Sinjar area Wednesday and another eight across the border in Syria’s Al-Hol area.

The forces fighting for Sinjar face an estimated 300 to 400 jihadists in the town, Captain Chance McCraw, a US military intelligence officer, told journalists in Baghdad.

But it is not just the fighters that are a danger: ISIS has had more than a year to build up networks of bombs, berms and other obstacles in Sinjar.

Multiple explosives-rigged vehicles have been hit by coalition air strikes, while the peshmerga destroyed another with a MILAN anti-tank missile, the KRSC said.

“This is part of the isolation of Mosul,” Iraq’s second city, Colonel Steve Warren, spokesman for the international operation against IS (or ISIS), said of the campaign.

“Sinjar sits astride Highway 47, which is a key and critical resupply route” for ISIS, Warren said in Baghdad.

“By seizing Sinjar, we’ll be able to cut that line of communication, which we believe will constrict (ISIS’s) ability to resupply themselves, and is a critical first step in the eventual liberation of Mosul.”

The fact that the operation comes at the same time as others against ISIS in Iraq and Syria also increases pressure on the group.

“It paralyses the enemy, right—he’s gotta make very tough decisions now on who does he reinforce,” Warren said.

In conjunction with the Sinjar operation, the Syrian Democratic Forces group—an alliance between Kurdish fighters and other Syrian rebels—is battling IS across the border in the Al-Hol area.

‘We will definitely return’

ISIS overran Sinjar in August 2014, attacking the Yazidis in what the United Nations has described as possible genocide.

Thousands of Yazidis fled to Mount Sinjar, which overlooks the town, and were trapped there by ISIS. Aiding them was one of Washington’s main justifications for starting its air campaign against the jihadists last year.

With support from international strikes, Kurdish forces have regained significant ground, and had been positioned at the edge of Sinjar for months.

Some Yazidis watched the fight for Sinjar unfold from the mountain where members of their community were earlier besieged.

“I came with two of my children to Mount Sinjar to watch the battle,” said Burjis Saleh, 60, who has been living in a camp for displaced people.

Qassem Khudaida, a 34-year-old who was previously wounded in the foot after volunteering to fight, said: “I am very happy because the battle of liberation has begun… We will definitely return to our city.”