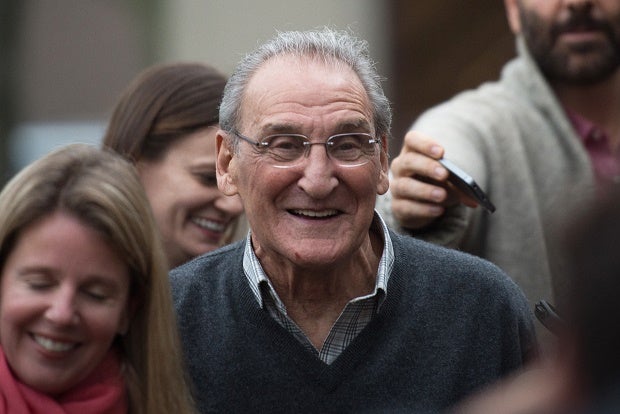 Vincent Asaro, allegedly a member of the notorious Bonanno crime family, was accused of murder, violence and extortion that allegedly spanned 45 years from the late 1960s until 2013.

He was found not guilty on all counts, said a spokeswoman for the US attorney’s office in Brooklyn.

In the biggest heist on US soil, armed mobsters stole $5 million in cash and nearly $1 million in jewels from a Lufthansa Airlines vault at John F. Kennedy airport on December 11, 1978.

The value of the booty today is estimated at around $20 million. Asaro was the first, and probably last, alleged member of the mafia to be prosecuted over the heist.

The trial, which began on October 19, spotlighted the secretive workings of the Italian mafia, including revenge murders, racketeering, robbery and illegal gambling.

Jurors began deliberations on Monday night and took a break for the Veterans Day holiday on Wednesday.

The acquittal of Asaro, who had been facing life in prison if convicted, is a stunning blow for federal prosecutors in Brooklyn.

Apparently pointed out to authorities by a cousin, Asaro was arrested by the FBI in January 2014 in a series of raids that also netted his middle-aged son Jerome and three other suspects.

Prosecutors also accused him of ordering the murder of a cousin in the 1980s who managed to escape to Florida on a tip-off.

Asaro and his son were also charged with participating in additional armed robberies, including around $1 million in gold salts.

The Lufthansa heist became legendary after its alleged mastermind James Burke—also known as Jimmy the Gent—killed off members of the crew to avoid being shopped to the police.

The judge in Asaro’s trial barred those murders from being discussed in court.

Scorsese immortalized the criminal feat in his Oscar-winning 1990 movie “Goodfellas,” long considered one of the best crime films of all time.

Burke, who died of cancer in prison in 1996, was the inspiration for Robert De Niro’s character Jimmy Conway in the film.

Asaro was not depicted in the movie, which earned six Oscar nominations including for best picture and best director. Joe Pesci took home the film’s only golden statuette for best supporting actor.

Asaro also stood accused, with Burke, of strangling Paul Katz with a dog chain in 1969 because they suspected he was cooperating with investigators, burying his body under the cement basement floor of an empty home.

In the mid-1980s, Asaro allegedly ordered his son Jerome and another individual to dig up the body and move it to avoid detection.

In 2013, the FBI recovered a right hand and wrist, hair, teeth, clothing and human tissue identified by DNA as belonging to Katz from the Burke family home in Queens.

But at trial, his defense team said prosecutors lacked evidence.

“If Vincent Asaro is truly the dangerous, violent, murdering individual depicted by the government, why did it take so long to arrest him?” asked defense lawyer Diane Ferrone.