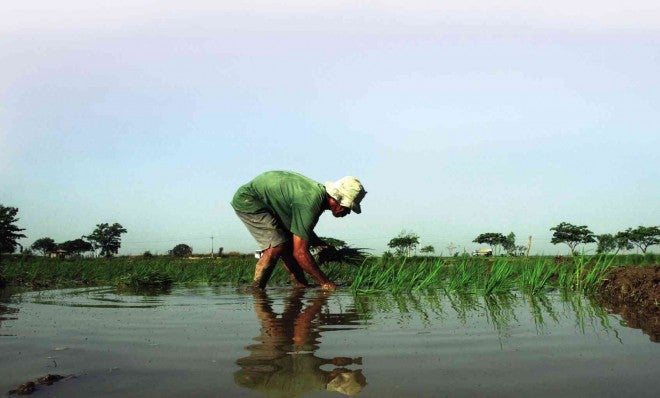 RICE PLANTING is back-breaking work that also exposes farmers to diseases and other hazards, according to an agriculture expert. EDWIN BACASMAS

LOS BAÑOS, LAGUNA—Before you put that spoonful of rice in your mouth, think about this first.

Rice production in the Philippines is doing more harm than good to farmers, the environment and consumers, according to an agriculture expert.

Dr. Eufemio T. Rasco Jr., member of the National Academy for Science and Technology and former executive director of the Philippine Rice Research Institute (PhilRice), said the first ugly effect of rice is on farmers involved in its production.

At a lecture in the University of the Philippines Los Baños (UPLB), Rasco said rice farmers in the Philippines suffer physically and economically as a result of the way rice is being produced.

Farmers, he said, bend for long hours to plant and harvest rice, causing lower back pains.

Farmers are also exposed to diseases like schistosomiasis, malaria, fungal and bacterial infections and hazards like snake bites, he added.

According to Rasco, farmers are also at the losing end because they get the least out of rice production, getting only P50,000 each year after other players in the rice supply chain had gotten their shares.

Farmers’ income, he said, is expected to further decline at the start of the economic integration of countries belonging to the Association of Southeast Asian Nations (Asean) which would melt down trade barriers, like duties and tariffs, and pave the way for the free exchange of goods.

On the environment, rice production in the Philippines is also harmful because of monocropping, said Rasco.

So much water is wasted in rice production, he said, that to produce a kilogram of rice, at least 5,000 liters of water is used.

Health-wise, according to Rasco, rice is also not an ideal food but Filipinos are heavy rice eaters. In the Philippines, he said, per capita consumption of rice in 2009 (119) is more than double the global average (65).

Other conditions associated with excessive rice consumption are heart disease, stroke and atherosclerosis, to name a few, he added.

Humans, Rasco said, do not need to eat rice, adding that humans started to eat rice only some 200,000 years ago. Hunters and gatherers, before the invention of fire and cooking, survived on meat and plants.

He argued that the human body “has not adapted [yet] to grains consumption, including rice.”

Rasco, however, said not all kinds of rice are bad. “This is our savior, brown rice,” he said. Brown rice has more nutrients and lower glycemic content (50) than white rice (70).

But given the arguments against rice, why do farmers continue to produce it? Two reasons, Rasco said, are that most land is suitable only for rice production and farmers lack other skills.

To reduce dependence on rice by farmers and consumers, Rasco said an answer would be diversification.

Instead of planting only rice, farmers can plant other crops and grow poultry and livestock alongside crops.

Rasco said he hoped consumers would eventually realize that rice is not good for them.