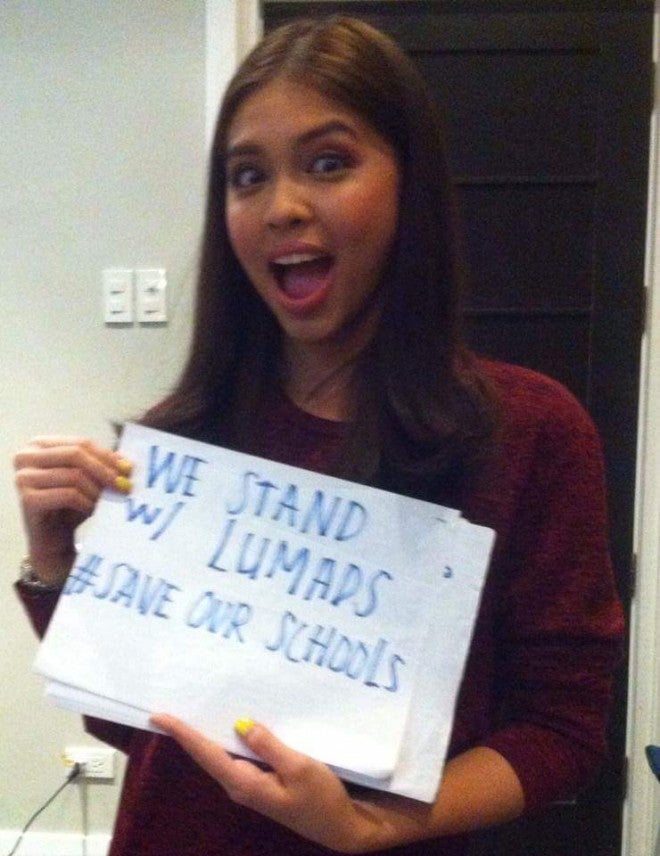 The viral photo of Maine “Yaya Dub” Mendoza showing her support for the lumad. PHOTO FROM RANDY EVANGELISTA’S FACEBOOK ACCOUNT

A military official said Maine Mendoza, prominently known as “Yaya Dub” in the hit “kalyeserye” segment of the noontime show “Eat Bulaga,” was misled into supporting the cause of the displaced indigenous peoples or lumad.

In an ambush interview after the House of Representatives Indigenous Cultural Communities And Indigenous Peoples committee hearing on Thursday, Brigadier General Joey Kakilala said the lumad organizers of the Manilakbayan misled Mendoza and other famous personalities into supporting their cause.

A photo of Mendoza holding the sign “We Stand with Lumands #SaveOurSchools” circulated online. The lumad are now in Manila for a caravan to protest militarization in their ancestral domain, where firefight has ensued between the military and the New People’s Army.

Other celebrities and famous personalities who have actually visited the campout of the lumads are singer Seguerra, actor Alex Medina, and even Manila Archbishop Luis Antonio Cardinal Tagle.

Kakilala said the lumad are appealing to the emotions of the famous personalities and using them for their cause.

He said if Mendoza and the other personalities knew the real issue behind the displacement of lumads, they would have reservations in supporting the Manilakbayan.

Social media sentiment gained ground when photos of a killing in a lumad school circulated online. Last Sept. 1, Emerito Samarca, the director of Alternative Learning Center for Agricultural and Livelihood Development (Alcadev), and lumad leaders Dionel Campos and Bello Sinzo  were killed by suspected paramilitary groups in Sitio  Han-ayan in Lianga, Surigao Del Sur. Samarca was found dead in a classroom, hogtied, stabbed and with his throat slit.

Meanwhile, the military has claimed the Alcadev was used as a front to indoctrinate lumad children with the communist ideology. IDL