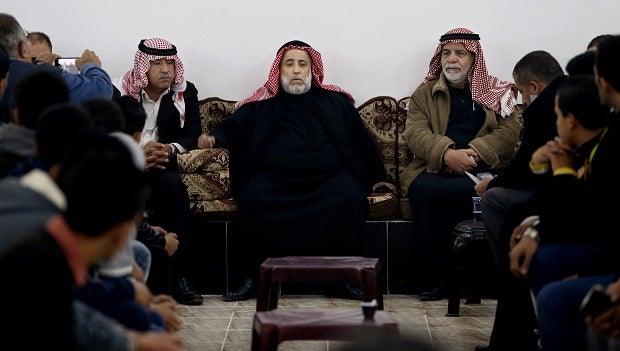 Suleiman Saed, center, a relative of Anwar Abu Zaid, the alleged shooter who opened fire Monday, Nov. 9, 2015 on instructors at an international police training center in Jordan’s capital, killing at least five people, including two Americans, briefs the media at the family home in Amman, Jordan, Tuesday, Nov. 10, 2015. Saed is a former member of parliament and speaks on behalf of the family. Jordan has not released the name of the attacker, but Saed says he was told by security officials that Abu Zaid was the attacker. AP

AMMAN, Jordan — A shooting rampage at a police training center that killed five people, including two American instructors, took place in a canteen in the compound, the Jordanian government spokesman said Tuesday.

Monday’s shooting also killed a South African contractor and two Jordanians who worked as translators for the foreign instructors at the facility. Six people were wounded, including two Americans.

Officials have released few details, but government spokesman Mohammed Momani said Tuesday that the attacker, a Jordanian police captain, opened fire in a dining hall. The assailant was killed by security forces, Momani has said.

Images circulating on social media showed three large pools of blood on the floor of a room with at least two tables, one of them bearing plates of food.

It was not clear if there was a political motive to the shooting spree.

Concern has swirled in pro-Western Jordan over possible revenge attacks by Islamic militants since the country assumed a high-level role in the US-led military campaign against the Islamic State extremist group, which controls large areas of neighboring Syria and Iraq.

The government has not released the name of the attacker. A former parliament member, Suleiman Saed, has said security forces told him a relative, 29-year-old police Cpt. Anwar Abu Zaid, was the assailant. Abu Zaid’s family has said he was not an extremist.

The two Jordanian translators were to be buried later Tuesday and Wednesday.

Translator Awni al-Akrabawi, 44, worked at the training center for the past three years and had close ties with his American colleagues, said a relative, Khairallah al-Akrabawi.

Al-Akrabawi, a father of four, had lived in the United States for more than a decade and spoke fluent English, said his relative, a former parliament member. His funeral was to take place Wednesday to enable US relatives to reach Jordan, Khairallah al-Akrabawi said.

The two dead American instructors were both from Florida, according to a statement released by Florida Gov. Rick Scott. He identified the men as Lloyd Carl Fields Jr., of Cape Coral, and James Damon Creach, of Tampa.

Scott said he was “heartbroken” to hear of their deaths “while providing police training to increase safety in the region.

“Both men served as law enforcement officers and will be remembered for their service to protect others,” he said.

Thousands of police officers from the region, including the Palestinian territories, have undergone training at the Jordanian-run center on the outskirts of the Jordanian capital of Amman.