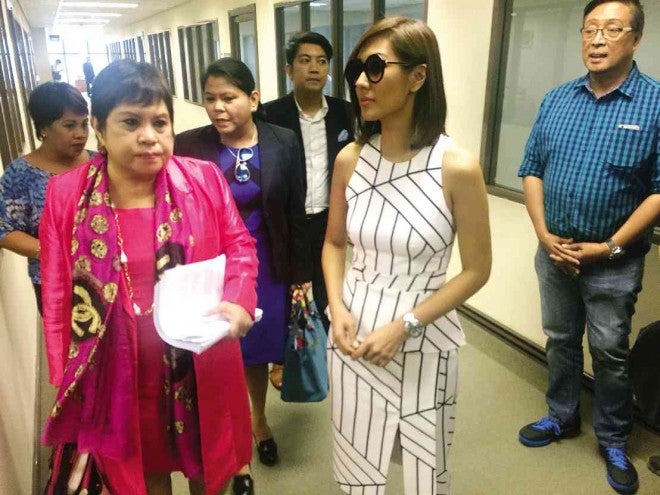 CELEBRITY stylist Liz Uy on Monday filed cases of online libel and grave slander against a fashion blogger over his claims that she made Maine Mendoza, aka Yaya Dub, wear a recycled gown and jacket. At the same time, she asked the Makati Prosecutor’s Office to award her P11 million in damages.

In her 24-page complaint, Uy cited Michael Sy Lim’s Twitter posts and blog entries on his Fashion Pulis website criticizing her for making Mendoza wear “a recycled gown” during the “Tamang Panahon” event at the Philippine Arena on Oct. 24 and a “hand-me-down jacket” for a magazine photo shoot.

Uy’s lawyer Lorna Kapunan said the posts were “meant to destroy the reputation of the celebrity stylist and cause fans to hate her.”

“I have been receiving hate mails because of the allegations,” Uy told reporters. She said that she was determined to fight for her right as Lim has been badmouthing her in his social media posts and even during events.

According to Lim, the dress worn by Mendoza at the Philippine Arena had already been worn by actress Kim Chiu during a 2013 fashion show.

Gown designer Francis Libiran later clarified that the gown has not been worn “at any other event by another celebrity.”

As for the slander charge, Kapunan explained that Lim also made “false and verbal tirades” against Uy during a gathering at the Manila Peninsula on Oct. 28.

According to actress Isabelle Daza, she heard him accuse Uy of making Mendoza wear to a photo shoot a jacket which the stylist had already worn to another event.

“The posts and accusations of Lim [are] untrue, malicious, irresponsible and made in bad faith. They were meant to cast aspersion upon Ms Uy, erode her credibility as a fashion stylist and paint her as an incompetent fashion stylist for Maine,” Kapunan said.

The Inquirer tried to reach Lim for comment but he did not respond to text messages.