Greedy politicians get in the way of ‘Yolanda’ relief 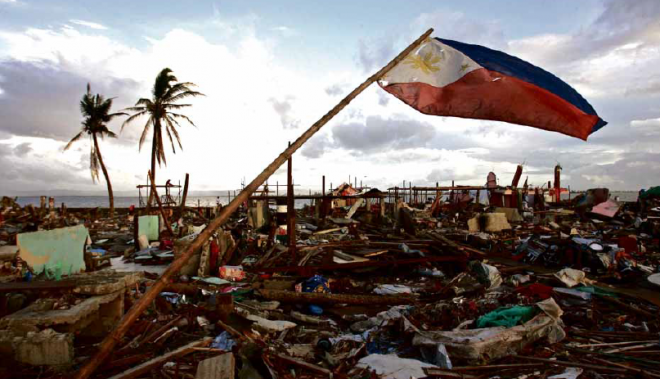 ‘WE’RE STILL HERE’ A Philippine flag flutters in the wind from a near-fallen bamboo pole in Tacloban City, signifying the residents’ resilience after the devastation caused by Supertyphoon “Yolanda.” RAFFY LERMA

She was eligible for the emergency shelter assistance (ESA) from the government and was supposed to receive a cash grant of P30,000.

“But I did not receive even a single centavo. Why? Because I was taken off the list because of the apparent intervention of our barangay chair,” Pido said.

Her son ran against the incumbent barangay chair during the 2013 barangay elections.

“(The barangay captain) won. But apparently, [he] has yet to forget [the elections]. This could be the reason why I did not receive the ESA,” she said.

She said another son, who is not living with her, managed to get shelter assistance.

Marissa Cabaljao, secretary general of People Surge, a group composed of “Yolanda” survivors, said the organization had documented reports that some local officials, particularly in some barangays in Eastern Visayas, made money out of the ESA.

Cabaljao said there were several instances that a barangay chair refused to give barangay certifications to ESA beneficiaries unless they gave him a share.

“It has turned into a political tool as those who are not in the graces of the barangay chair have been delisted,” Cabaljao said.

In Iloilo province, hundreds of survivors in San Dionisio town had sought assistance from the provincial government after P500 was deducted from their ESA, supposedly for food for village watchmen and policemen who secured the distribution of the aid in the municipality.

The Department of Social Welfare and Development (DSWD) staff were told to leave by some town officials during the distribution of the ESA in San Dionisio, Social Welfare Secretary Corazon Soliman said, citing a report of the agency’s Western Visayas office.

Soliman said no amount should be deducted from the shelter assistance unless it was voluntarily given by the beneficiaries.

She said elected municipal officials had the responsibility to make sure the assistance was given and their presence in the ESA distribution was part of their job.

But other officials should not be present and take part in the distribution, she said.

Soliman cited reports that Iloilo Rep. Niel Tupas was among the officials who interfered in the ESA distribution in Iloilo’s fifth district.

Tupas denied the report, saying it was part of his responsibility as a legislator to oversee the release of the assistance.

He filed a resolution in the House of Representatives seeking an inquiry into irregularities in the distribution of the assistance and the involvement of DSWD personnel.

In Estancia town in Iloilo, a survivor is resigned that her family is not eligible for the ESA because their house is located on the coastline, considered a danger zone.

The survivor, who requested anonymity for fear of reprisals from officials, said a person who had connections in the municipal social welfare and development office (MSWDO) informed her that her family could still receive a cash grant of P10,000 intended for survivors whose homes were damaged by the supertyphoon.

Later, an acquaintance at the MSWDO offered her a P10,000-loan payable when the ESA was released.

Needing money for the repair of the family house, the survivor accepted the offer in July last year. Around 40 families in their villages also took out similar loans, she said.

The survivor said she received P8,400 because the loan shark deducted a 16-percent interest, or P1,600.

To the survivors’ surprise, however, the ESA was released in less than two weeks.

“I wouldn’t have taken the loan and paid the interest if I knew the ESA would be released so soon,” the survivor said.

She said those who took out the loan were made to sign the list of beneficiaries to indicate that they received the ESA during the distribution although they didn’t receive any cash.

“Some people have obviously made money out of our meager assistance,” the survivor said.

“There’s no truth to that. No one here is involved in lending activities,” Cordero told the Inquirer.

The DSWD also reported that 20 local governments have failed to comply with the Sept. 10 deadline set by the agency to distribute the ESA to the beneficiaries.

Twelve of the local governments were in Central Visayas, four in Mimaropa (Mindoro, Marinduque, Romblon and Palawan), three in Eastern Visayas and one in Western Visayas, according to a report made by Assistant Social Welfare Secretary Vilma Cabrera.

Soliman earlier said ESA funds not released by local governments by the deadline would be distributed by the DSWD to the survivors.

She said the agency aimed to complete the distribution of the aid before the end of the year to avoid association with the May 2016 elections.

In a report, the watchdog group Social Watch Philippines said the beneficiaries didn’t receive the ESA immediately because of the delay in the release of cash allocations by the Department of Budget and Management.

The distribution of the shelter assistance has also been hindered by “political squabbles” and “tainted” lists of beneficiaries.