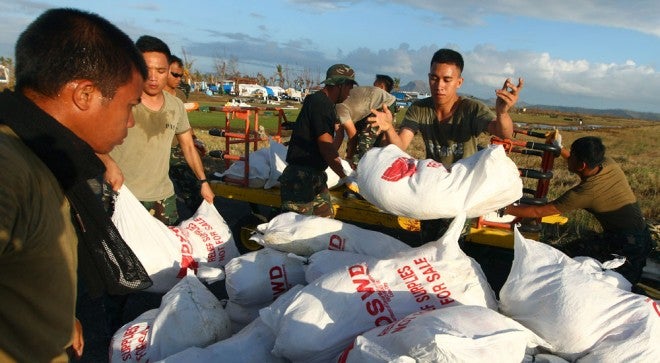 Members of the Philippine military unload relief goods for  those affected by Typhoon Haiyan at the airport in Tacloban. AP FILE PHOTO

TACLOBAN CITY, Philippines—For the past two years, Marissa Cabaljao has been among those in the forefront demanding the release of emergency shelter assistance (ESA) for survivors of Supertyphoon “Yolanda” (international name: Haiyan).

But the secretary general of the Tacloban-based People Surge, can only chuckle when asked about her situation.

Cabaljao has not received any shelter assistance from the government even as she has been fighting for assistance for thousands whose houses have been destroyed or damaged when the supertyphoon ravaged the Visayas on Nov. 8, 2013.

“The ESA distribution did not only come late but was also plagued by a lot of problems, including corruption and (politics),”said Cabaljao, 29, whose house in Calbiga town in Samar province was damaged during Yolanda’s onslaught.

The assistance is supposed to speed up the recovery of communities devastated by Yolanda. These are mostly in Western Visayas, Eastern Visayas, northern Cebu and Coron in Palawan province.

But the ESA distribution through the Department of Social Welfare and Development (DSWD) and local governments started only in November last year, and continuing this year.

Social Welfare Secretary Corazon Soliman admits that it has taken a long time for the ESA to be released.

She explained that the delay in the distribution of the ESA was due to the late release of funds and countervalidation of the list of beneficiaries to make sure that only those deserving would get it.

The DSWD central office reported that as of Oct. 28, 2015, P18,388,470,000 in ESA had been released to local governments in Western, Central and Eastern Visayas as well as in Mimaropa (Mindoro, Marinduque, Romblon and Palawan), which suffered the brunt of the devastation.

But many more families whose houses were damaged or destroyed were categorized as ineligible for ESA under the DSWD Memorandum No. 24.

Under the memorandum circular issued by Soliman in November last year, those who have permanent monthly income of more than P15,000 will not be eligible as beneficiaries of the ESA.

Survivors who have received full shelter assistance from international or local private organizations and those living in areas considered “danger zones” are also ineligible.

The DSWD has said the guideline was intended to ensure the prioritization of those needing assistance due to limited funds for the ESA.

Kusog sang Pumuluyo, an alliance of survivors and those supporting them on Panay Island, estimates that about 10,000 families were excluded from ESA under the DSWD guideline.

One of them is Emma Pedrano, 53, who lost her house in Barangay Culasi in Roxas City in Capiz province.

Pedrano’s family waited for assistance from the government for a year until they were told that they were not eligible because they lived along the coastline, a danger zone.

They were able to rebuild their house in December last year with help from the Catholic relief agency Caritas, which gave each family 10 pieces of galvanized iron sheet, 10 pieces of plywood and nails.

“The materials given to us were not enough. We built only a place where we could sleep,” Pedrano, vice chair of the provincial chapter of the urban poor group Kadamay, said in an interview with the Inquirer.

“We were all hit by the typhoon and Yolanda did not select its victims. There should be equal treatment,” she said.

But Soliman stands by the memorandum amid widespread calls for its revision or scrapping.

“Those with a monthly income of P15,000 and above have access to other sources of funds. Our priority is to provide for the most vulnerable,” she said.

Soliman said allowing survivors to rebuild their houses in danger zones would only put them at risk again.

But those who used to live along the coastline and chose to transfer to bunkhouses built by the government are still living in the supposedly temporary shelters two years after they lost their homes.

In Estancia town in Iloilo, about 40 families have been staying in bunkhouses in Barangay Gogo since April 2014 without electricity because they cannot afford to pay their bills.

Estancia Mayor Rene Cordero said the local government was waiting for the completion of a housing project of the National Housing Authority to move the families.

Soliman said there was a need to fast-track the development of resettlement areas, which has been hindered by a lack of land.

Other survivors were fortunate to receive housing assistance from private organizations.

In Ajuy town in Iloilo, about 74 kilometers northeast of Iloilo City, Vilma Chavez shares a 24-square-meter house with seven other family members.

She, however, does not mind the cramped space.

“I can sleep well at night because our house is not dripping. Nobody can tell us to leave because we own this now,” she told the Inquirer.

She said that for the first time, her family had a toilet and running water in their house.

Chavez, 43, was among beneficiaries representing 132 families who were given new houses in the Caritas Village.

The 132 families lived in 66 duplex units on a 1.6-hectare lot in Barangay Malayuan just beside the national highway.

The project costing P31.6 million was funded by the Caritas Austria, Caritas Internationalis and Caritas Philippines, and implemented by the Jaro Archdiocese through its social action center.

The beneficiaries were ineligible for the ESA because they lived near the shoreline.

‘Funds all accounted for’

Only sacks, not trucks, of rotten aid buried in Leyte – Soliman