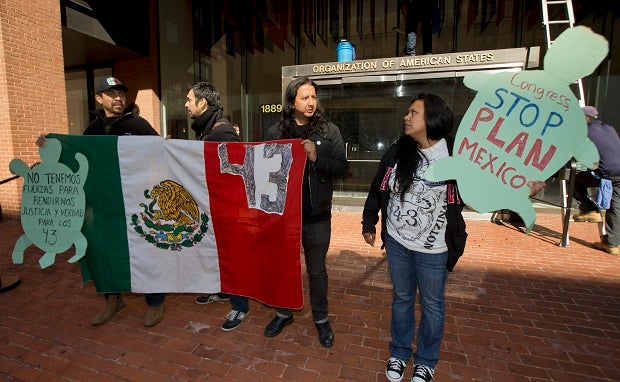 Protestors, from left, Arnuldo Borja, SG Sarmiento, Jose Espada, and Madai Ledezma, gather during a rally outside the Organization of American States (OAS) in Washington, Tuesday, Oct. 20, 2015, to demand a follow-up to independent human rights report. The Inter American Commission on Human Rights is holding hearings about Mexico, including one about 43 college students disappeared in 2014 in the Mexican state of Guerrero. Mexican prosecutors have said the students were killed and incinerated at a garbage dump, but a group of experts assembled by the IACHR concluded a pyre of that magnitude couldn’t have occurred there. AP Photo

MEXICO CITY, Mexico—Independent experts investigating the disappearance and alleged incineration of 43 Mexican students said Friday that they only received partial information from crematoriums, which they consider crucial to their probe.

The foreign experts from the Inter-American Commission on Human Rights said in a statement that “only partial information has been obtained from private crematoriums,” which they say is “key” to the case.

The independent investigators have called on authorities to look at crematoriums to check whether any were used to burn the students who vanished in the southern state of Guerrero on September 26, 2014.

In September, the commission experts released a report rejecting the official investigation’s conclusions in the case, saying there was no scientific proof that the students were incinerated at a landfill.

Prosecutors say the students were abducted by local police after they hijacked buses in the city of Iguala and handed over to a drug cartel, which killed them and burned their bodies.

The independent experts, who have been given a second mandate following a six-month probe, urged the authorities to conduct new searches for the students.

The attorney general’s office insists that at least a “large” number of students were incinerated at the landfill in the town of Cocula, though prosecutors have agreed to conduct new forensic tests there.