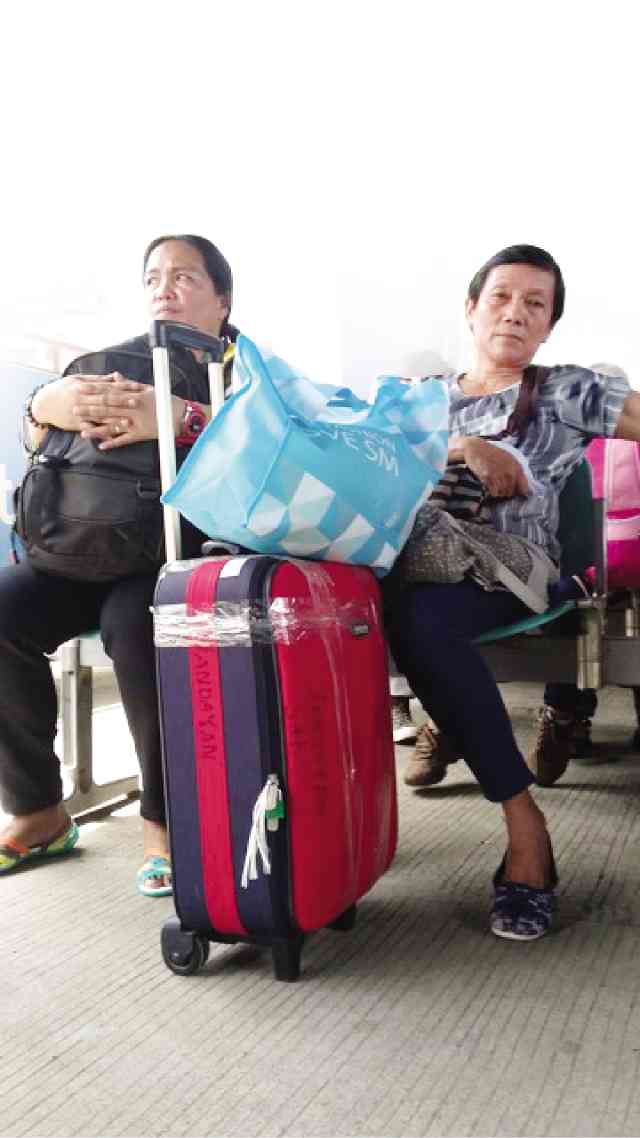 Aside from being padlocked and zipped up, plane passenger Cynthia Velasquez’s (right) bag is secured by a transparent packaging tape at Tagbilaran City airport. Velasquez admitted it is a measure against “tanim-bala,” the extortion racket victimizing travelers at Ninoy Aquino International Airport. LEO UTDOHAN/INQUIRER VISAYAS

The fear of falling prey to extortion or being accused of it has made luggage sealed on the outside with packaging tape and airport personnel keeping a distance from bags passing through X-ray machines familiar sights in airports in the Visayas and Mindanao.

At the airport in Tagbilaran City, passenger Cynthia Velasquez is one of the hundreds who have made an extra effort to make sure they don’t become victims of the so-called “tanim-bala” (bullet-planting) syndicate that reports said was having a heyday at Ninoy Aquino International Airport but may also be present in airports outside Metro Manila.

“This is 100 percent safe,” said Velasquez, 52, gesturing toward her luggage, visibly secured by packaging tape on the outside.

“They are indiscriminate in choosing their victims,” said Velasquez, referring to the tanim-bala extortion ring. “Better safe than sorry,” she said.

The fear lingers even as the Philippine National Police-Aviation Security Group (PNP-Avsegroup) at Tagbilaran Airport issued a statement seeking to assure passengers that measures are being taken to keep the airport tanim-bala-free.

Maria Glendale Ramos, intelligence officer of the Civil Aviation Security Bureau in Tagbilaran, said screening officers are being checked before they are allowed to enter the airport.

“Our screeners undergo a pat down and secondary screening to make sure they don’t bring anything (into the airport),” said Ramos.

A “no touch” policy is in force at Tagbilaran Airport which bars security officers checking luggage from touching passengers’ bags.

The policy allows screening officers to touch passengers’ bags only if passengers request for help to load their bags onto X-ray machines.

Ramos said if anything suspicious appears on the X-ray machine, police and a witness would be called and the passenger would be the one to open his or her bag for checking.

If a bullet, or any banned substance, is found, a police officer would conduct an investigation and determine probable cause to file a case.

Ramos insisted, though, that there is no tanim-bala racket at Tagbilaran Airport, although some passengers had been caught carrying bullets.

“Many people believe that a bullet can be an amulet, that it has power to protect its owner from danger or harm,” she said.

She recalled a case in 2012 when a passenger was arrested for carrying bullets. Seven cartridges of live ammunition were found in the passenger’s bag and the passenger had been arrested and charged.

In Davao City, the PNP-Avsegroup started distributing leaflets to passengers at Davao International Airport, listing tips on how to avoid falling victim to the tanim-bala racket.

Chief Insp. Eugene Balugo, head of the Aviation Security Unit (ASU) in Southern Mindanao, said the effort was part of police’s contribution to help ease the fear of airline passengers.

The leaflet advises passengers to be “vigilant as air travel security is everybody’s concern.”

The five tips that it gave on avoiding the tanim-bala racket were: keep a close eye on luggage and never allow strangers to handle these; close all zippers, pockets of luggage and seal these; keep an eye on the luggage as it passes through X-ray machines and metal detectors; quickly retrieve bags in the X-ray machines; and never accept luggage from strangers.

In October, Davao City had its first case of a passenger yielding a live bullet at the city airport.

Augusto Dorde, 60, of Quezon City, was flying out of the city after checking a water supply project when an X-ray check showed what looked like a bullet inside his bag. When it was opened, two bullets were found.

Dorde vehemently denied owning the bullets. He was, however, charged and was freed on bail.

Balugo said upon questioning, Dorde expressed surprise at how the bullets got into his bag. Dorde, according to Balugo, surmised that the bullets may have been planted in his bag not at the city airport.

Balugo said his office continues to investigate 44 members of the ASU here and security screening officers and porters.

“But personally I can vouch for my men here and the staff. The airport can be a small place and everyone knows each other,” said Balugo.

On Monday, Mayor Rodrigo Duterte asked President Aquino to take drastic action to put a stop to the tanim-bala racket.

Duterte had offered to serve as a lawyer to victims of tanim-bala.

“Mr. President, you have to cross the red light, you should do something drastic, your lip service is not enough,” said Duterte.

He said he was worried that the racket might victimize more passengers bound for Hong Kong or Singapore from the city airport, and bring the victims to deeper trouble in those countries.

“What would be more tragic is if the one who will be victimized comes from the provinces, doing connecting flights to Hong Kong, Singapore, America,” Duterte said.

“In this case, innocent Filipinos will directly land in other countries’ prisons,” he said.

“This is not just a matter of extortion, this will threaten the lives and freedom of ordinary Filipinos,” said the mayor.

He said he found it impossible for the tanim-bala racket to prosper without the connivance of police and other authorities.

“I cannot express my anger, I can only commiserate with the innocent victims,” said Duterte.

He said if Mr. Aquino failed to stop the racket, “I will lose trust in you.”

On Thursday in Ligao City in Albay, Roxas called on authorities to put a stop to the racket and bring to justice those involved in it.

Roxas’ call for an investigation was a shift from his earlier statement when he declined to give a clear answer when asked who should take responsibility for the damage caused by reports about the racket.

“Bullets are contraband everywhere in the world, especially in the time of antiterrorism, especially live ones,” Roxas told reporters during a sortie in Cauayan, Isabela province, early this week.

But on Thursday, Roxas said in an interview here that the investigation should be done immediately to determine whether indeed, a syndicate is behind the bullet-planting cases.

He said the investigation should also determine if there are government officials involved.

“If there are people in government involved in this, they should be removed from service and face criminal charges,” said the standard-bearer of the ruling Liberal Party.