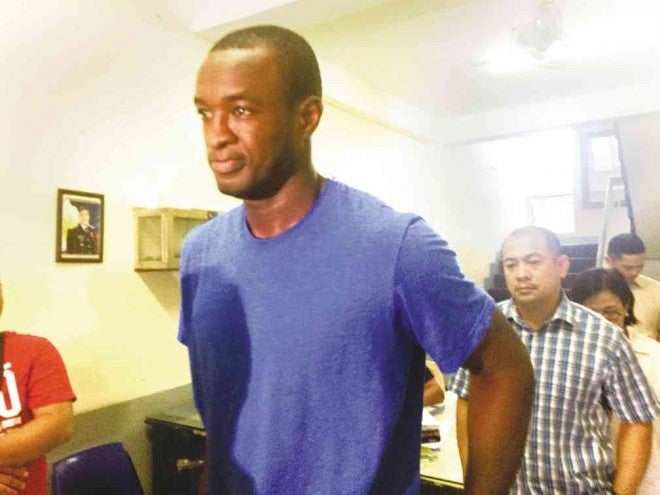 Ateneo Blue Eagles big man Chibueze Ikeh walked out of police detention Thursday after posting bail in connection with the domestic violence case filed by his former girlfriend and will likely play in the game against La Salle on Sunday.

“I don’t see any reason why he will be barred because this has nothing to do with the UAAP (University Athletic Association of the Philippines) or even Ateneo,” Emmanuel Fernandez, athletics director of the Ateneo de Manila University, told reporters at the Quezon City Police District headquarters.

Ikeh was arrested Wednesday night by a team from the QCPD warrant and subpoena section after a game against the UP Maroons at Smart Araneta Coliseum in Cubao.

The police served a warrant issued by Judge Maria Lourdes Giron of Quezon City Regional Trial Court Branch 102, where the Cameroonian   is facing charges for violation of the Anti-Violence Against Women and their Children Act (Republic Act No. 9262). Bail was recommended at P24,000.

Fernandez and Ateneo team manager Epok Quimpo came to get Ikeh around noon Thursday after the player posted bail. “Ikeh will not be making a statement regarding the matter,” Fernandez told reporters.

About three weeks ago, another Blue Eagles player, John Apacible, was suspended by the school after a video that had gone viral showed him in a drunken outburst during a traffic altercation. He was shown challenging the person taking the video to a fight while brandishing a “Councilor” vanity license plate.

Apacible was barred from playing for the rest of the second round of the UAAP Season 78.

But Fernandez said no such sanction would  be imposed on Ikeh. “This is a private matter, it has nothing to do with his actions. It’s a very different thing.”

According to Fernandez, a player is only barred from playing in the UAAP if the student was suspended in school, and there was no provision in the rules regarding players facing criminal cases.

Asked whether the incident had affected team morale, Fernandez said: “I would say the morale of the team is good because we are in a winning streak. Right now they have a very good position in the Final Four.”

The complaint against Ikeh was filed in 2014 by Elsa Payumo-Ulloa, his former girlfriend.  According to the complaint, Ulloa met Ikeh through her professional dealings with Ateneo as sports coordinator and representative for Guam Basketball.

Ulloa alleged that when they started dating, Ikeh would ask her for money and that the total amount had reached more than $1,000. Ikeh also borrowed her smartphone and when she asked for it back, Ikeh allegedly threw the phone to the ground and repeatedly insulted her  in public.

The experience left her afraid, traumatized and embarrassed, the complaint said.

Records showed that Ikeh did not attend the preliminary investigation and did not submit a counteraffidavit.