Is Grace Poe a Marcos? DNA test up 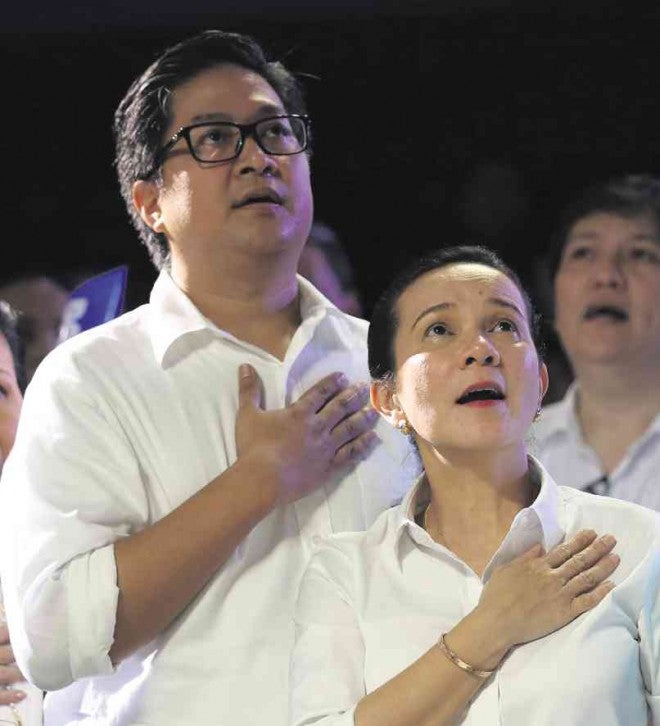 Now we will know whether it’s true or just an “urban legend.”

Sen. Grace Poe, a presidential candidate in next year’s general elections, on Thursday welcomed the offer of Sen. Ferdinand “Bongbong” Marcos Jr. to take a DNA test with her to help her find her biological parents.

The offer of Marcos, 58, came a day after Poe, 47, disclosed in a radio interview that the DNA test she had taken with two people she had believed were potential relatives turned out negative.

Asked by reporters during a news forum in the Senate if he was willing to help Poe find her real parents, Marcos replied: “Sure, I will take a DNA test. No problem.”

“That’s very nice of him. It’s heartwarming,” Poe said after learning what Marcos had said.

“I don’t want to impose it on Senator Marcos, but I’m happy that he’s open and willing,” she said.

Rumor has been going around since the 1960s that Poe is an illegitimate daughter of Marcos’ father, the late strongman Ferdinand Marcos, with former movie actress Rosemarie Sonora, sister of Poe’s adoptive mother, movie actress Susan Roces.

Poe was abandoned in a church in Jaro, Iloilo province, after birth. She was adopted by movie actor Fernando Poe Jr. and his wife, Roces, in 1973.

Senator Marcos is the only son of the late dictator and his wife, former first lady and now Ilocos Norte Rep. Imelda Marcos.

The Marcoses and the Poes have denied the rumor, but it has not really died, and Poe said one of her cousins had been hurt by it.

She was referring to movie and television actress Sheryl Cruz, a daughter of Sonora.

In September, as Poe set about looking for her parents through DNA tests with potential relatives to supplement her defense in a disqualification case in the Senate Electoral Tribunal (SET), Cruz called a news conference to say that she would not take a DNA test to help Poe.

Cruz said she did not want her mother’s name to be dragged into Poe’s search for her parents and that she knew that the story about her mother and former President Marcos was not true.

“I don’t want my mother to be dragged into this. She wants to keep the peace in the family. I don’t want it to appear that my mom had an affair with a man who’s not my father,” Cruz said.

Senator Marcos, according to Poe, had earlier refused to take a DNA test to disprove the talk that they were brother and sister

“He said he did not like [to take a DNA test], not because he wanted to be part of an urban legend or because we were lying but because there was no reason for people to think that way, that’s only gossip,” Poe said in late September.

Son of his parents

On Thursday, Marcos sounded confident as he offered to help Poe.

“They won’t see anything in the DNA test because I’m the son of my father and mother,” he said.

But what if the test turns positive?

“Then, welcome to the family,” Marcos replied, drawing laughter from reporters.

If Poe turns out to be his sister, would blood be thicker than water?

“It is up to her,” he said. “I cannot answer the question for her. Let’s cross the bridge when we get there.”

But Poe is not in a hurry to have a DNA test with Marcos.

“There are other people who could take the test,” she said Thursday.

“As a foundling, you cannot really be sure, that’s why you should look into the possibility that someone is your relative. [But you also] cannot just test everyone,” she said.

Poe, the front-runner in voter preference polls for the presidential election, said she was sad that the first two DNA tests returned negative results.

But she said she remains confident that she would eventually find a relative and a test could be taken.

She said she and her advisers were considering advertising to hasten the search for a relative.

“But this is just a suggestion,” she said.

Poe maintained that the question of her parentage should not be used to take her out of the presidential race, saying it would be tantamount to “injustice to other foundlings” in the country.

“Actually, the burden of proof should be on those [who are seeking my disqualification]. But I’m doing this to speed up the case and for myself,” she said.

Besides the disqualification case in the SET, Poe is also facing disqualification cases in the Commission on Elections (Comelec), alleging that she is not a natural-born Filipino because her parents are unknown or that she does not meet the 10-year residency requirement for presidential candidates.

“It’s saddening that I have yet to find them, but I’m also hopeful because there is a higher purpose for me,” Poe said.

She said she was confident that the disqualification cases against her would be dismissed eventually.

“It’s not enough [to decide on my disqualification] based on DNA because if that’s the case, I won’t be able to fight for the rights of other foundlings who don’t have the capacity to undergo the legal process,” she said.

“There would also be [professionals] who would lose their licenses because of questions about their birth,” she added.

“The more important thing is, this is for my personal [satisfaction] and to end my long search [for my parents],” she said.

Poe will appear before the Comelec Second Division next Tuesday for the hearing on the case brought against her by former Department of Justice prosecutor Estrella Elamparo.

Elamparo alleges that Poe, a former US citizen, does not meet the 10-year residency requirement for presidential candidates.

“Although her presence is not required by the Comelec, we decided that she will be there during the hearing,” said George Garcia, a lawyer for Poe.

“We are confident that the disqualification cases against

Sen. Grace Poe will all be dismissed in the Comelec. Our trust in the institution and its members is unparalleled. The Constitution is on our side. The truth is our guide,” Garcia said. With a report from Tina G. Santos