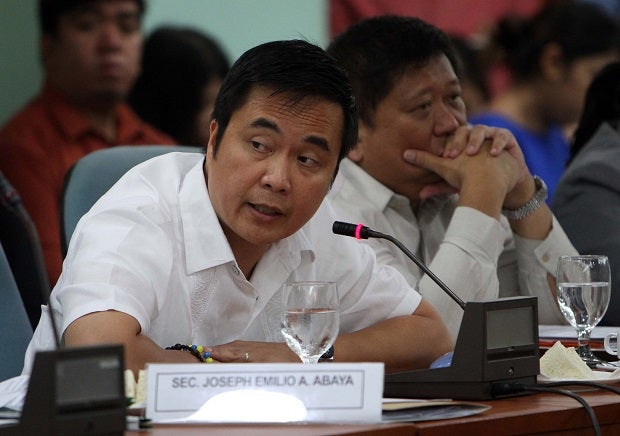 Ignorance of the law is not an excuse but it offers an opportunity for extortionists at Ninoy Aquino International Airport (Naia).

Asked if he was convinced there was a syndicate behind the extortion scheme, Transportation Secretary Joseph Emilio Abaya said, “Honestly… we have yet to get any fact that there is a syndicate operating.”

Downplaying the extent of  “tanim-bala” (bullet-planting) extortion schemes in the country’s airports, including Naia, Abaya encouraged lawmakers to review the Comprehensive Firearms and Ammunition Regulation Act.

Since 2012, more than 6,600 people have been arrested for illegal possession of ammunition at airports nationwide, according to records of the Office for Transportation Security (OTS).

At a press conference at Naia Terminal 3, Abaya said he left the wisdom of possible amendments to the law, decriminalizing the possession of three bullets or less, to his former colleagues in  Congress.

“We merely follow the law and I encourage my former colleagues to take a look at the law again,” said Abaya, a former Cavite representative.

OTS Administrator Roland Recomono claimed that it was his first time to come across the tanim-bala scheme, pointing out that since 2012 there has been no complaint of extortion against his agency’s personnel.

“It all started in September this year,” he said.

It was only after American missionary Lane Michael White alleged that OTS personnel had planted a .22 cal. bullet and tried to extort P30,000 from him that similar claims, about 13 of them, surfaced.

But Recomono pointed out that since 2012, only two people had formally lodged complaints against OTS personnel for their alleged involvement in the tanim-bala extortion scheme.

Of the 5,736 persons arrested for illegal possession of ammunition since 2012 at Naia, none of them cried tanim-bala until September this year, the OTS administrator said.

Abaya assured the public that the Manila International Airport Authority (MIAA), the OTS and the Aviation Security Group (Avsegroup) were exploring ways, mainly through an awareness campaign, to remove opportunities for extortionists to prey on passengers.

“The question is: Is there an opportunity to extort or exploit? Yes, there are a lot of opportunities out there (airports),” he said, pointing out that not everyone knows the provisions of the Comprehensive Firearms and Ammunition Regulation Act.

In such a case, Abaya said, an “entrepreneur” in the form of an unscrupulous airport worker or security officer could tell a person caught with a bullet casing that he could go to jail for it and offer his “services” for a fee.

MIAA General Manager Jose Angel Honrado said that to help in the awareness campaign, his office would put up more signages at the four Naia terminals to advise passengers and visitors on items prohibited at the airport and on aircraft.

“So, if you have something prohibited on the list before you enter the terminals, you will be able to remove it right away,” he said, adding that TV monitors at the departure gates will also be installed to give travelers reminders on the different destination countries.

Also the OTS has installed closed-circuit television (CCTV) cameras in the departure area security screening checkpoints of the terminals. This is to deter unscrupulous personnel from taking advantage of passengers and filter false claims of extortion from apprehended passengers.

According to Abaya, security and law enforcement agencies assigned at the airports were compelled to abide by the Comprehensive Firearms and Ammunition Regulation Act. “The law is the law. If it is not implemented, they (police and OTS) will be the ones who will be charged.”

The Avsegroup head, Chief Supt. Pablo Francisco Balagtas, said: “Whether it is one  bullet or 100, there is no distinction. A violation is a violation. Our police officers will commit malfeasance if they choose to ignore the law.”

Of 139 interceptions at Naia so far this year, 51 cases of illegal possession of ammunition were filed in court by the Avsegroup, he said.

“We cannot let these incidents slide,” Abaya said. “At stake is the safety and peace of mind of every Filipino. Any incident like this must impel government to examine its procedures, identify weaknesses and come up with solutions and innovations … We can always have the best equipment but the weakest link will always be human intervention.”