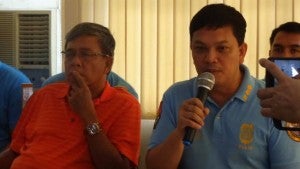 Zamora himself made the revelation at a press conference he hosted at the Compostela Valley police headquarters in Nabunturan town on Tuesday.

At the same time, the vice governor also denied the contents of the reported police intelligence report linking him to an illegal drug syndicate operating in the province and in nearby Davao del Norte – which was named after his moniker, Way Kurat (roughly translates to unfazed).

The Philippine Daily Inquirer tried but failed to get a statement from the Southern Mindanao police office. Calls and text messages to police officers assigned at the regional headquarters in Davao City went unanswered.

Zamora said it was apparent that the report linking him to illegal drugs was part of the effort to malign him and could be the work of some policemen and civilians.

“I was being tagged as behind the so-called Way Kurat drug syndicate that allegedly operates in Asuncion, Kapalong and another town in Davao del Norte as well as in all the 11 municipalities of (Compostela Valley). That isn’t true, of course,” the former three-term congressman said, citing information from a source at the Southern Mindanao regional police intelligence division.

Zamora, whose daughter Ma. Carmen is seeking her third and last term as representative for Compostela Valley’s first district, said the said source tipped him off on his supposed inclusion in the list of politicians allegedly involved in illegal narcotics trade, just days after he filed his candidacy for reelection.

The supposed intelligence report tagged two police officers as his cohorts in the alleged drug syndicate bearing his moniker.

The elder Zamora, who gained national prominence for biking his way to Congress when he was first elected in 2001 and carrying ballot boxes during the national canvassing of votes in the 2004 elections, said he has always been supportive of the provincial police’s anti-drugs campaign being the vice chair of the provincial peace and order council (PPOC) for the past three years.

The 64-year old former kristo (cockpit bet caller) said the accusation against him was baseless and purely due to politics.

“I don’t worry about that. You can see the pattern. Last Oct. 13, a day after I filed my certificate for reelection, I was included in the (drugs watchlist). Weeks before that, I, together with Boardmember (Ramil) Gentugaya, was accused of being a murderer,” Zamora said, daring his accusers to file illegal drugs charges against him before the court.

Asked by the media if he would undergo a drug test to prove he has not been doing drugs, Zamora accepted the challenge and even dared fellow candidates to do the same. He said the mayoralty candidates in the province’s 11 towns should do the same.

Senior Supt. Albert Ignatius Ferro, Compostela Valley police chief, said they have not identified a single politician who might be involved in the thriving illegal drug trade in the province.

Ferro said provincial officials like Zamora and Gov. Arturo Uy have been supportive of the police’s efforts against illegal drugs by providing additional financial and logistical support to Task Force Agila, a police unit spearheading Compostela Valley’s war on drugs.

“All candidates should be clean. We should be role models. We should undergo drug test in public,” he said, adding that the drug problem has become a national concern.

“Those who would test positive, withdraw your candidacy. We should be ashamed to present ourselves as clean if we’re not,” he added.  SFM