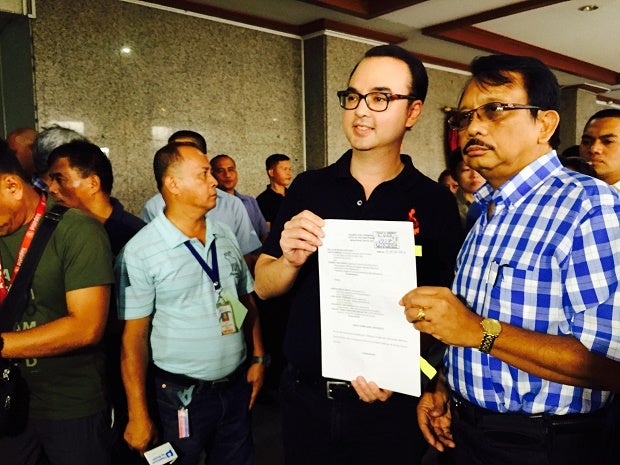 Sen. Alan Peter Cayetano, along with Volunteers Against Crime and Corruption chairperson Dante Jimenez, files the administrative complaint against Department of Transportation and Communications (DOTC) Secretary Joseph Emilio Abaya and executives of the Ninoy Aquino International Airport (Naia) at the Office of the Ombudsman over the alleged “tanim-bala (planting a bullet) scam” victimizing airline passengers. YUJI VINCENT GONZALES/INQUIRER.net

Sen. Alan Peter Cayetano on Tuesday filed an administrative complaint against Department of Transportation and Communications (DOTC) Secretary Joseph Emilio Abaya and executives of the Ninoy Aquino International Airport (Naia) at the Office of the Ombudsman over the alleged “tanim-bala (planting a bullet) scam” victimizing airline passengers.

Citing Executive Order No. 226 or the Institutionalization of the Doctrine of Command Responsibility in all Government Offices, Cayetano said an official is presumed to have knowledge of irregularities “when illegal acts have been committed within his area of responsibility” such as “tanim-bala” incidents.

(Under the EO 226 of President Ramos, if you have the knowledge about a crime that happened and continues to happen, and you know that the personnel under your supervision commit them and you did not do anything to be proactive, it means that you have no preventive corrective measure, you are liable administratively.)

“While cases are being investigated now, it took the government more than one month bago mag-meeting at the level of DOTC, para pag-usapan ‘yung ‘laglag-bala,’” he added.

(While cases are being investigated now, it took the government more than one month before a meeting

at the level of DOTC took place, to talk about “laglag-bala” [another term for “tanim-bala”].)

If proven guilty of negligence, Cayetano wants the named officials to be dismissed from office.

In the alleged extortion racket, airport security officials supposedly insert bullets in the luggage of passengers and ask them for money in exchange of dropping charges of illegal possession of ammunition.

The latest victim of “tanim-bala” was a 65-year-old woman with a tightly sealed shoulder bag bound for Singapore to watch her nephew play soccer.

After Malacañang downplayed the reported cases, President Benigno Aquino III himself ordered an investigation into the “tanim-bala” incidents and instructed Abaya to look into the matter amid growing public outcry.

Saying that the national government refused to acknowledge the issue at first, Cayetano compared the Palace’s response to that of Davao City Mayor Rodrigo Duterte, who offered legal aid to “laglag-bala” victims and threatened perpetrators that he would make them swallow bullets.

(In Davao City, when the authorities found out that there are such incidents, additional policemen were deployed, leaflets were handed out, and the mayor himself said: “I am in charge here. We will sue them, we will make these people who commit ‘laglag-bala’ eat the bullet.” So there was someone immediately in charge. However, here in our area, it seems like there is a denial that is happening. It means the government has refused to acknowledge at first that there is a problem.)

A confident Cayetano said the complaint may be a landmark case as it would instill a sense of command responsibility among government officials.

Reported cases of “tanim-bala” caused fear and paranoia among passengers, with photos of them wrapping their bags in plastics going viral on social media.

Lawmakers also ordered an inquiry into the incidents and called for the sacking of airport authorities.

However, the PNP-Avsegroup on Monday maintained that it was possible for the scam to be carried out inside the airport, denying speculations that there was a syndicate behind it.

“Tanim-bala” has also attracted the attention of foreign media, reporting the recent cases hounding the Naia, which was once tagged as the world’s worst airport. RAM

Read Next
Man says wife beat him before he posted picture of her body
EDITORS' PICK
Tulfo questions BIR for going after online sellers instead of oil smugglers
Unleash the photographer in you this World Photography Day with vivo smartphones
The TECNO Camon 19 Series Philippine launch
Can’t control ‘ukay-ukay’ imports? Tulfo proposes legalizing it for taxes
House energy committee chair Arroyo bats for cheap electricity
SRA chief Serafica resigns following sugar importation mess
MOST READ
Cherie Gil’s daughter on partying after mom’s death: ‘I’m grieving but it’s not my job to show you that’
Tulfo grills BIR, BOC for going after online sellers instead of oil smugglers
LOOK: Mavy Legaspi gifts Carmina Villaroel with Hermes bag on her birthday
1 dead, 2 hurt as old chopper crashes in Clark
Don't miss out on the latest news and information.