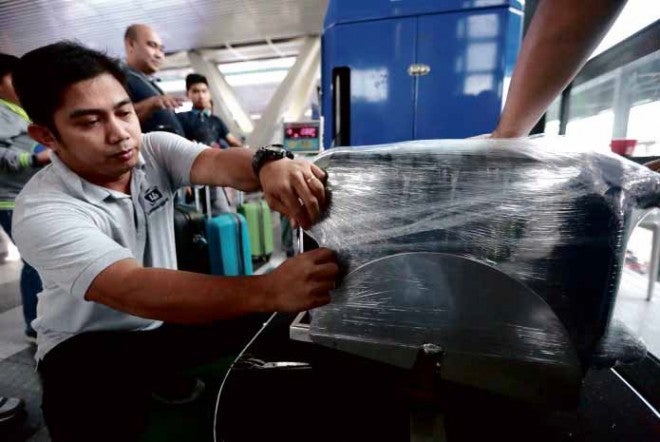 FOR SECURITY Travelers have their luggage wrapped in plastic for P160 a piece as security against the “tanim bala” racket at Ninoy Aquino International Airport. GRIG C. MONTEGRANDE

AMID calls that heads must roll among airport managers and security officials, yet another apparent case of the “tanim-bala” scam was reported Sunday, with a 65-year-old woman who was bound for Singapore to watch her nephew play soccer as its newest victim.

Nimfa Fontamillas of Cavite City vehemently denied that she owned the bullet allegedly found in her shoulder bag, which she had tightly sealed for fear she could fall victim to the alleged racket at Ninoy Aquino International Airport (Naia).

She waited six hours for her lawyer to arrive before the bag was opened. Although the contents of the bag had been taken out, a bullet mysteriously appeared in the security monitor and later found in its side pocket.

Incidents of bullet planting in the bags of local and foreign travelers and overseas Filipino workers have sparked a nationwide public indignation, but the racket appeared to continue unabated with impunity.

On Sunday, three lawmakers called on President Aquino to sack Jose Angel Honrado, the general manager of the Manila International Airport Authority (Miaa), and other top officials in the Office for Transportation Security (OTS) and the Philippine National Police-Aviation Security Office (PNP-Avseco).

The lawmakers said these officials, who had denied wrongdoing, were responsible for failing to curb the extortion racket at Naia involving the practice of planting bullets in the luggage of passengers and then asking them for bribes to be spared from arrest and other penalties.

The chair of the labor committee in the House of Representatives, Karlo Alexei Nograles, a Davao City representative, said Honrado was “causing pain and anguish not only to the Aquino administration but to the entire nation as well.”

“The Philippines is now the subject of worldwide ridicule and Honrado has nobody to blame but himself for his negligence and insensitivity,” Nograles said in a statement.

“Travelers using our airports are now too terrorized that they even wrap their luggage with masking tapes just to stop Naia people from planting bullets in their bags. This is really embarrassing. No airport in the world can you find this kind of paranoia. Only in the Philippines,” Nograles said.

Abakada Rep. Jonathan de la Cruz said Honrado and all other officials involved in the operations and security at Naia must all submit their courtesy resignation, especially in the light of the upcoming Asia-Pacific Economic Cooperation (Apec) Leader’s Summit.

“Even as we are rushing with our last-minute preparations for Apec, we must enjoin all the heads of agencies in charge of operations and security at the international airport to submit their courtesy resignation,” he said.

“We need to put in an entirely new crew in charge of inspection and security and file charges against those involved in this tanim-bala operation,” De la Cruz said.

“This tanim-bala operation at Naia is a one-money, one-fund operation. It is a syndicate that is involved not just in extortion but also in smuggling. It is big business and Honrado definitely knows all about their operation,” De la Cruz said.

OFW Rep. Roy Señeres, a presidential candidate, said a full revamp should be made in the Miaa, the OTS and the PNP-Avseco.

“A full-blown reorganization is needed if indeed President Aquino is serious in his declaration that he would put a stop to this tanim-bala practice at the Naia,” Señeres said.

He also urged the Office of the Ombudsman to step in and conduct a lifestyle check on airport and security officials and personnel.

Under lock and key

Fontamillas arrived at Naia Terminal 1 at around 6 a.m. for her Tiger Airways flight when her shoulder bag went through the final screening X-ray scanner. The bag was flagged after officers detected what resembled a bullet inside. Fontamillas refused to have her bag opened and inspected until after there were witnesses, including her lawyer.

Around noon, Fontamillas’ lawyer, Clint Estandarte, arrived and opened her bag, which she had sealed with a combination lock and had its outside pocket zipper stitched together.

Initially all the contents of the bag were taken out and revealed no contraband. But when the apparently empty bag was ran through the X-ray scanner, what appeared to be a bullet was displayed on the monitor.

When unzipped by Estandarte, the outside pocket yielded a 9mm bullet.

The woman was aghast and insisted that she would never carry a bullet while her lawyer was rendered speechless. She said she could not have possibly brought a bullet because she and her family did not have guns.

Fontamillas’ daughter. Menchu Tan, who was with her for the trip to Singapore, told reporters that they were going there to watch her 11-year-old son’s football game for the Singa Cup.

She confided that she and her daughter had gone to the extent of sealing all their luggage in plastic, stitching up baggage zippers, and putting more padlocks because they wanted to avoid being victimized by the tanim-bala syndicate.

Fontamillas is facing a charge of illegal possession of ammunition.

Bayan Muna Rep. Neri Colmenares said the scam necessitated a legislative investigation on two points: “First, if whether we need to review the law that criminalizes mere possession of one or two bullets, and second, if we need to draft a law that will simply confiscate one to two bullets but will not criminalize it.”

“We need to consult on this possible review because this has been going on for sometime and it is possible that many of the commanding officers knew about the scam but tolerated it or are part of the scam,” said the senior deputy minority leader.

“A study of the records and/or the videos may show that many are accosted for this offense but only few are charged. But this irregularity failed to trigger suspicion by the higher-ups at the Office of Transportation Security,” said Colmenares, a Makabayan senatorial candidate.

“We will review if there is a need for a complete overhaul of the personnel in light of this persistent practice of victimizing overseas Filipino workers and other passengers,” he said.

Honrado’s spokesperson, David de Castro, in a text message, called for sobriety. “It will be good to focus our efforts on investigating the matter and actually removing the people from the airport who are directly involved in the alleged scam,” he said.

De Castro said Transportation Secretary Joseph Emilio Abaya’s standing order was for the conduct of investigations. “That is being done as the [Avseco] leads investigations when it comes to the passengers while the DOTC-OTS handles investigations on their personnel allegedly involved,” he said.

“Miaa removes access passes of any airport worker under investigation or has cases filed against him or her,” he said.

No Miaa-issued access pass at Naia means no entry into restricted areas or employee zones in the four terminals. A person without an access pass is allowed only in the public areas of Naia.

Should preparations for terroristic acts be punished? Justice cites case of ‘Captain Ri’

Should preparations for terroristic acts be punished? Justice cites case of ‘Captain Ri’