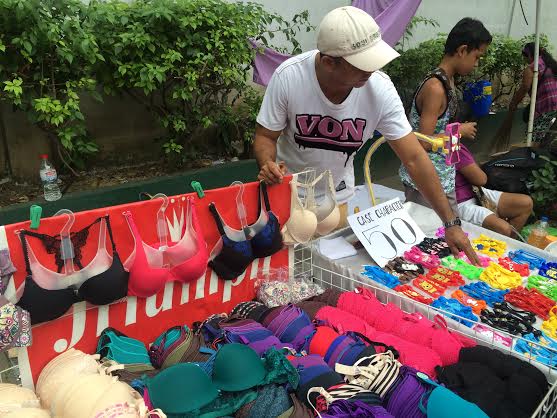 Bras are seen being sold just outside the cemetery on All Saints’ Day. Photo by Jovic Yee, Philippine Daily Inquirer

MANILA, Philippines — Trust Filipinos to be an enterprising lot especially in times when droves of people are expected to gather in a particular venue.

While candles, flowers and street foods were staple products one could expect to be peddled near the perimeter of a cemetery, some vendors have been seen selling household wares such as cups and plates, customized T-shirts and dresses, and even bras at the Manila South Cemetery. 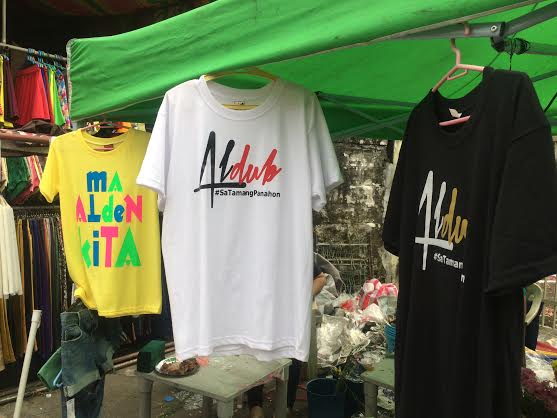 AlDub shirts sold like hot cakes at a cemetery on All Saints’ Day. Photo by Jovic Yee, Philippine Daily Inquirer

Among these vendors was Mike Tistor who had an unusual product to sell to people who are on their way to visit their dearly departed. Tistor, who usually sells his goods in Divisoria, posted his cart along Zapote Street in Makati City, to sell colorful bras along with cell phone cases bearing images of cartoon characters.

Asked by the Philippine Daily Inquirer on Sunday why he decided to sell bras near the cemetery, Tistor said he’d just like to take his “chance” on earning a few more money and take advantage of the huge crowd during this weekend. For as low as P150, Tistor’s customers could buy bra and for P50, a cell phone case.  He said he has earned P5,000 from selling bras and P3,000 from cell phone cases since Saturday. 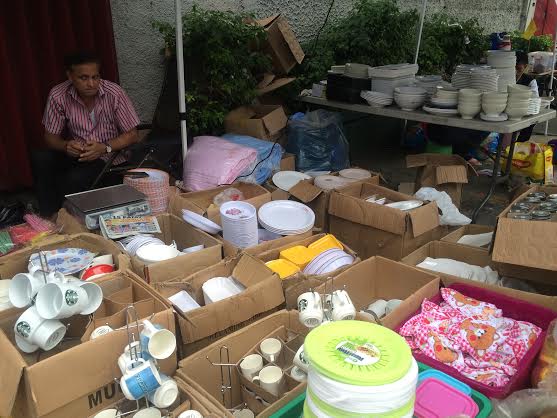 Enterprising vendors sell cups and plates outside a cemetery for those who did not bring any for their meals during the All Saints’ Day commemoration. Photo by Jovic Yee, Philippine Daily Inquirer

A vendor named Ogie was selling plates, cups and towels. He said people who did not bring plates for their meals were buying their plates and cups from them.  People could also bargain shop household wares at their stall.

Towels sold in Ogie’s stall retailed for as low as P10, while sets of plates and cups, depending on the size and design, could be bought for as much as P150. Ogie, however, was not too happy with the pace of business, which did not match their last year’s gross of P70,000.  Since Saturday, he said sold only P30,000 and the mood apparently was that people did not want to spend too much.

Vendor Aljoma said there were less people buying their toys.  He recalled that in the same time last year, their dolls and remote-control toys were such a hit that he had to get a fresh supply from Divisoria. But on Sunday, he said, there was still a boxful of toys that was not opened. 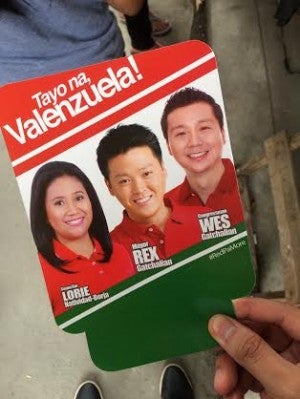 A cardboard fan bearing the image of three Valenzuela politicians were given away to cemetery goers on All Saints’ Day. Photo by Jovic Yee, Philippine Daily Inquirer

Customized T-shirt designer Reyna de Jesus, however, was happy to announce that her AlDub-inspired T-shirts were selling like hotcakes. De Jesus said that of the 50 shirts for at least three designs she made, only two for each were left. Each shirt can be bought for as low as P180.

Interestingly, it’s not only the micro and small entrepreneurs who have taken notice of the influx of people in cemeteries. In Valenzuela, just before families visited their departed loved ones at the Arkong Bato cemetery, a number of “volunteers” were handing out fans bearing the faces of city officials, namely, Mayor Rex Gatchalian, Rep. Wes Gatchalian and councilors led by Councilor Lorie Natividad-Borja.

By the entrance, families were greeted by tarpaulins bearing politicians’ images, notably that of senatorial aspirant and former Metropolitan Manila Development Authority Chair Francis Tolentino. His message was for everyone to have a “safe and blessed Undas 2015.”  SFM