A place for lesbians, gays to rest in peace 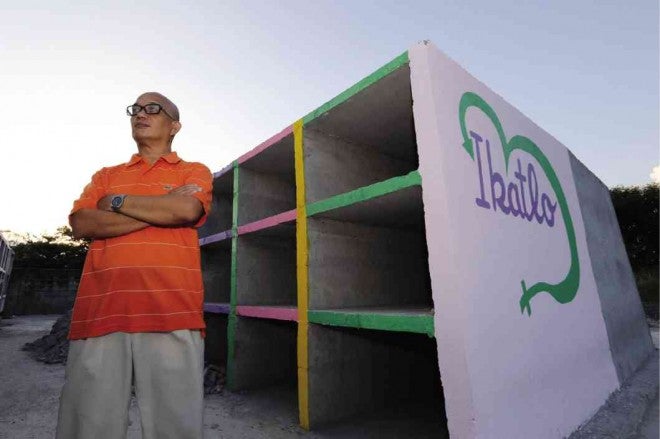 Some of them might have suffered stress and discrimination in life, but in death, members of the gay community in Rosario, Cavite province, can literally rest in peace, as they are assured a special place in a private cemetery.

At the town’s Salinas Garden of Memories: Alaala Magpakailanman, some 100 members of the lesbian, gay, bisexual and transgender (LGBT) community are allotted space in a 2,000-square-meter portion of the cemetery aptly named “Pink Pantheon with Rainbow Connection.”

The exclusive resting place for gay people was the brainchild of Mayor Jose “Nonong” Ricafrente, who said that a former City Hall employee’s failure to get a decent burial moved him to do something for the community’s gay population.

“The number of LGBTs in the area has grown to 500,” the mayor said, adding that the free interment space would benefit members of Ikatlo, Rosario, Cavite’s gay community that is registered with the Securities and Exchange Commission.

Ricafrente said the cemetery project was meant to foster equal representation and respect for gay people whom he considers important members of the community for their creativity. “You do not make them social outcasts,” he added.

Gay beneficiaries of the project are provided complete funeral services with a marching band and tombs, free of charge. Deceased male homosexuals are interred in a portion of the cemetery that has been painted pink and can be customized, while the portion for lesbians is rainbow-colored, Ricafrente said.

There are no reservations, however, he added, as a slot is provided only when the deceased is ready to use it.  So far, the apartment-type tombs donated by the privately owned Heaven’s Garden Memorial Park have yet to have their first occupant.

The prospect of having a final resting place among people who accept him for what he was, brought a measure of comfort for openly gay Pedro Laparan, 50, a former school teacher at La Salle Greenhills and at De La Salle University on Taft Avenue, and an educator at the Rosario City Hall.

Alone and without a family, Laparan said the free burial program for LGBTs was a breath of fresh air. “I don’t want to be a problem for people I will be leaving behind,” he said.

It’s not preferential treatment for gays, said Ricafrente, who describes himself as a straight guy with close ties to the gay community.  It’s just recognition of what they contribute to society, he said. “They are real people, who stand for what they think is right,” he added.

A mayor for 14 years now, Ricafrente proudly stated that the community has hired homosexuals as firefighters and traffic personnel.

The affirmation was something that could have saved Laparan a lot of heartache in his younger years.

The education major had to work his way to school selling mais con yelo  (a corn and shaved ice dessert), and spent the better part of his time proving that he might be different but still deserved other people’s respect.

Just when he thought he had found true love in a 15-year relationship with a barangay councilor in Pasay, Laparan found himself living alone and with painful memories of violence from his partner.  His relationship with another guy resulted in bankruptcy.

Such heartbreak led him to discover the beauty of living alone, albeit with fellow members of Ikatlo, said Laparan, whose amnesia and injuries after an accident brought on speculation that he would be Pink Pantheon’s first occupant.

It’s a reassuring thought, he said, of the tomb allotted him in the cemetery. “It’s good to know that something has been reserved for me and that I’d die beautifully and decently, with my remains kept properly.”

85% of Filipinos support protection of gays, lesbians vs discrimination–SWS

SWS: Homosexuals have right vs discrimination